PART TWO OF A TWO-PART SERIES

This is the second part of a two-part series that is an attempt to identify important people in the history of Saratoga Springs. As I stated in the first part, this started as a purely academic discussion between myself and my business partner Dave Patterson. The ground rules were simple, anyone added to the list must have passed away and had offered leadership during his or her life, to make Saratoga Springs a better city. There are truly many living Saratogians that are making huge contributions to the city today but were not considered because of our guidelines.

The part one identified the first five members, who were Doanda and Gideon Putnam, John Clarke, John Morrissey and Eliza Jumel.

The following identifies numbers 6-10 on the list of people important to the development of our great city. I hope you enjoy it and maybe you will develop your own list.

Richard Canfield was born in 1855 in New Bedford Massachusetts. He made his name as a gambler and was referred to as “The Prince of Gamblers.” Canfield had gambling interests in Manhattan and could see that Saratoga Springs, being the summer destination of the rich and famous was a perfect location. John Morrissey had already tested the gambling waters in Saratoga and knew that was it was an activity that was demanded by the wealthy for summer entertainment. After Morrissey died on May 1, 1878, his two lesser partners Spencer and Reed took over the operation that was called the Saratoga Clubhouse. Spencer and Reed were not as dynamic hosts as was Morrissey and operations dipped because of that change in leadership. Spencer and Reed were happy to eventually sell the business to Canfield and exit the gambling business.

Richard Canfield was a very smart businessman who was always striving to make his establishment the best in the world. He ran honest games and paid winners on the spot from his safe that held $1 million dollars daily. Patrons never felt cheated during a night of gambling at the Casino, and business flourished.

In an attempt to make the building more elegant he added the dining room in 1904, that today serves as the ballroom in the Canfield Casino. Women and children were never allowed in the gaming rooms, they were only allowed in the dining room. Serving some of the best food in the country, prepared by one of the top chefs made this room an instant success. Family members could feast on wonderful food while Dad was losing the family fortune in the gaming parlor or the High Stakes Room on the second floor. After consultations with the President of Harvard College, Canfield added the Italian Gardens in the rear of the property. The Harvard President had expressed the idea that offering a garden to allow people to stroll and contemplate while at the Casino would be a magnet for educated individuals to visit and maybe gamble.

The total cost to add the dining room and Italian Gardens was about $1 million dollars. The conversion to cost of today is about 15 to 20 times that figure.

The Canfield Casino was permanently closed to gaming in 1911 and was purchased along with half of the present-day Congress Park by the City of Saratoga for a mere $150,000. Canfield’s vision and investment in the building live on today with one of the finest buildings in the city.

William C. Whitney helped to save the Saratoga Race Course. Thoroughbred racing has had a real impact on our great city since 1863 when the first few races were run. Like all operations, there are changes and an evolution to produce the product seen today. In the later part of the 1800s, ownership of the track shifted to Gottfried Waldbaum. Waldbaum proved to be a less than perfect owner for the racing venue. He changed the times of racing and reduced purse money. He began to fix races and generally allowed a lot of dishonest practices on the track. Race fans and owners began to see these changes and the number of people attending the races dropped dramatically.

In 1899 as the track’s operation teetered on shutting down, W.C. Whitney led a movement to save the track. He bought the track, raised purses, added stakes races, had honest races, and changed the start time for the convenience of patrons. Whitney brought respectability to the track, and it flourished. In 1901-02 he re-configured the track and enlarged the grandstand with the guidance of NYC architect Charles Leavitt. Whitney added more property and built the Oklahoma training track. He raised the Saratoga Race Course to a solid level that would ensure its existence into the future. W.C. Whitney truly was a person who made a huge difference in Saratoga history.

Edgar Truman Brackett was born in Saratoga in 1853. After his years of education, he returned to the city in 1872 and began to have an impact on the city. He was instrumental in establishing the Adirondack Trust Bank and the construction and operation of McGregor Golf Links in 1921. As a lawyer and longtime State Senator he was helpful in many ways to guide Saratoga as it developed.

In my estimation Brackett was most important to the city as he led the efforts to limit the use and abuse of the mineral springs. In the early days mineral springs in the city were privately owned. In the latter half of the 1800s and into the 1900s, soda fountains became very popular in the country. Carbonated drinks were so popular that carbonic companies realized that any source of carbon dioxide gas was important and could produce huge profits. Since our mineral springs have natural carbonation, they were the target for overdevelopment. In 1904 the city had 203 mineral springs taking millions of gallons of water from the ground daily, separating the gas and dumping the water. These activities began to cause many of the long-time springs to stop flowing. It was through the efforts of Brackett, Spencer Trask and then Governor Charles Evan Hughes that legislation was passed to protect the springs. The Anti-Pumping Act was monumental for the protection of one of our most fundamental assets, mineral springs. The number of springs was reduced to 17 from 203 and ownership was transferred to State control. The regulation of the springs provided protection to ensure they would continue way into the future.

Most Saratogians know the Trask name as it is associated with the artist retreat called Yaddo. Both Katrina and Spencer impacted many things in Saratoga with Yaddo being just one of item.

In 1881 Katrina and Spencer moved to a summer house on the property of what today is known as Yaddo. They loved the property and enjoyed their time away from NYC. When the house burned in the winter of 1891 they were dedicated to re-building on the site. The current mansion that sits on the property today was completed in 1893.

Spencer was a financier, and owner of many companies including the New York Times for a while. Spencer led crusades in the city to stop gambling and also the preservation of the mineral springs. After helping to ensure the passage of the Anti-Pumping Act to protect the mineral springs, Spencer was working to organize the Saratoga State Reservation (State Park). Unfortunately, as he was traveling by train to NYC on New Year’s Eve 1909, a train accident resulted in his death. In honor of his life and service to the city, Katrina hired famed sculpturer Daniel Chester French to produce the iconic Spirit of Life statue in Congress Park.

The years after Spencer’s death were hard on Katrina with a lack of cash flow. She and Spencer had discussed the desire to change the Yaddo property into an artist retreat in the future. On February 6, 1921, Katrina married long-time family friend George Foster Peabody. Peabody’s wealth ensured that the plan to convert the property into an artist retreat would be completed. Katrina died less than a year after her marriage to Peabody.

Since 1926 almost 6,000 artists have visited Yaddo. More than a hundred years later, Yaddo is a true asset to the city.

Those people complete the list of our top ten people that impacted the great city of Saratoga Springs. The truth is that future endeavors to write a list will include many people living today. Our city is famous and successful because of the spirit of the community, and the list of people that are working hard to ensure that continues, is long in length. A city is really it’s people, and Saratoga Springs has so many great people, both today and in the past. 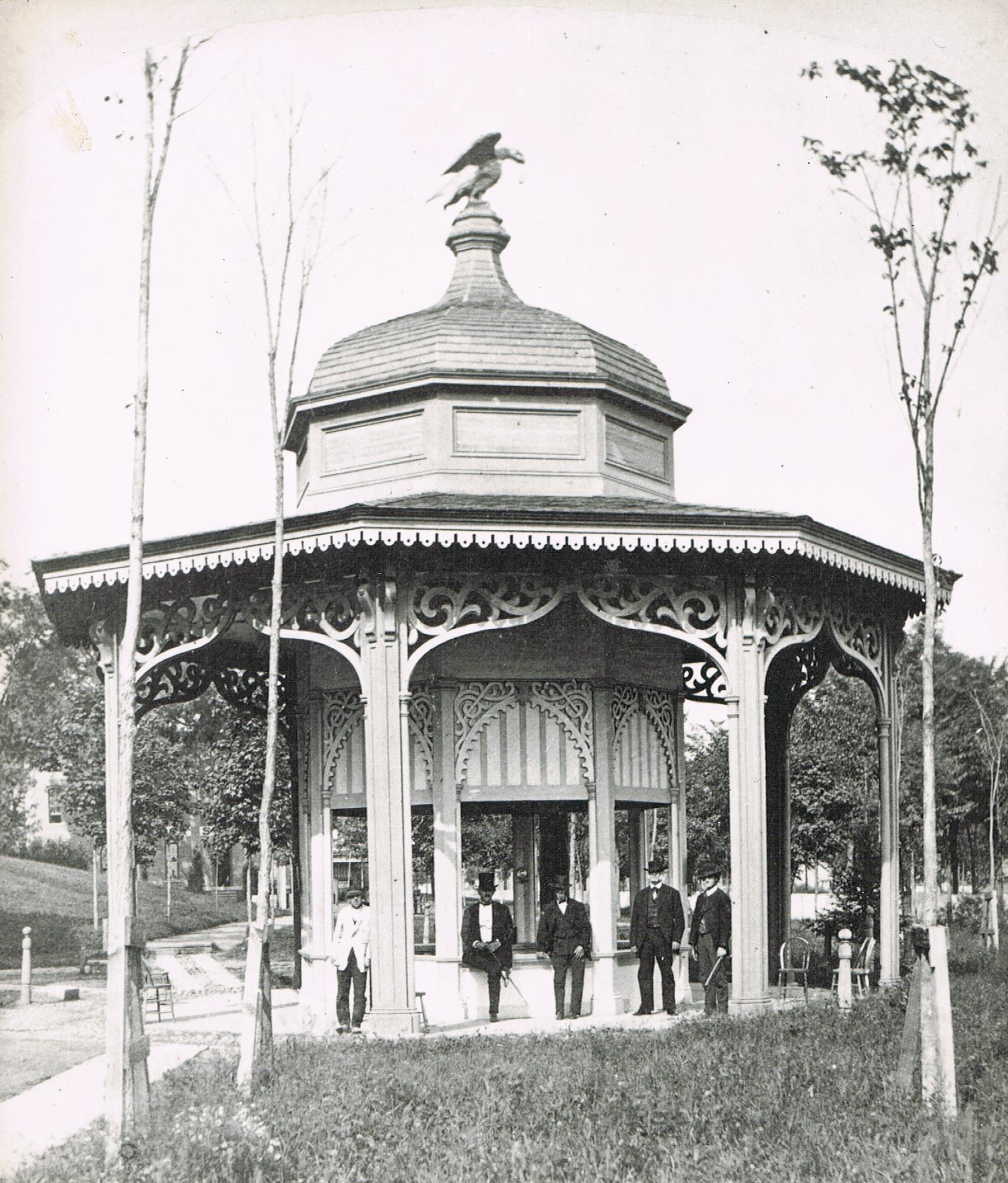 This is an image of the famed High Rock Spring after renovations to the site produced the famed “Eagle Cover” in 1876. All the mineral springs at this time were privately owned and those owners worked hard to make their spring covers be the best in the village.

The first year of operation for the Saratoga Race Course was 1863. In 1864 the track was moved to its present location and improvements were made in seating, viewing and track conditions. This was the first grandstand on the site. 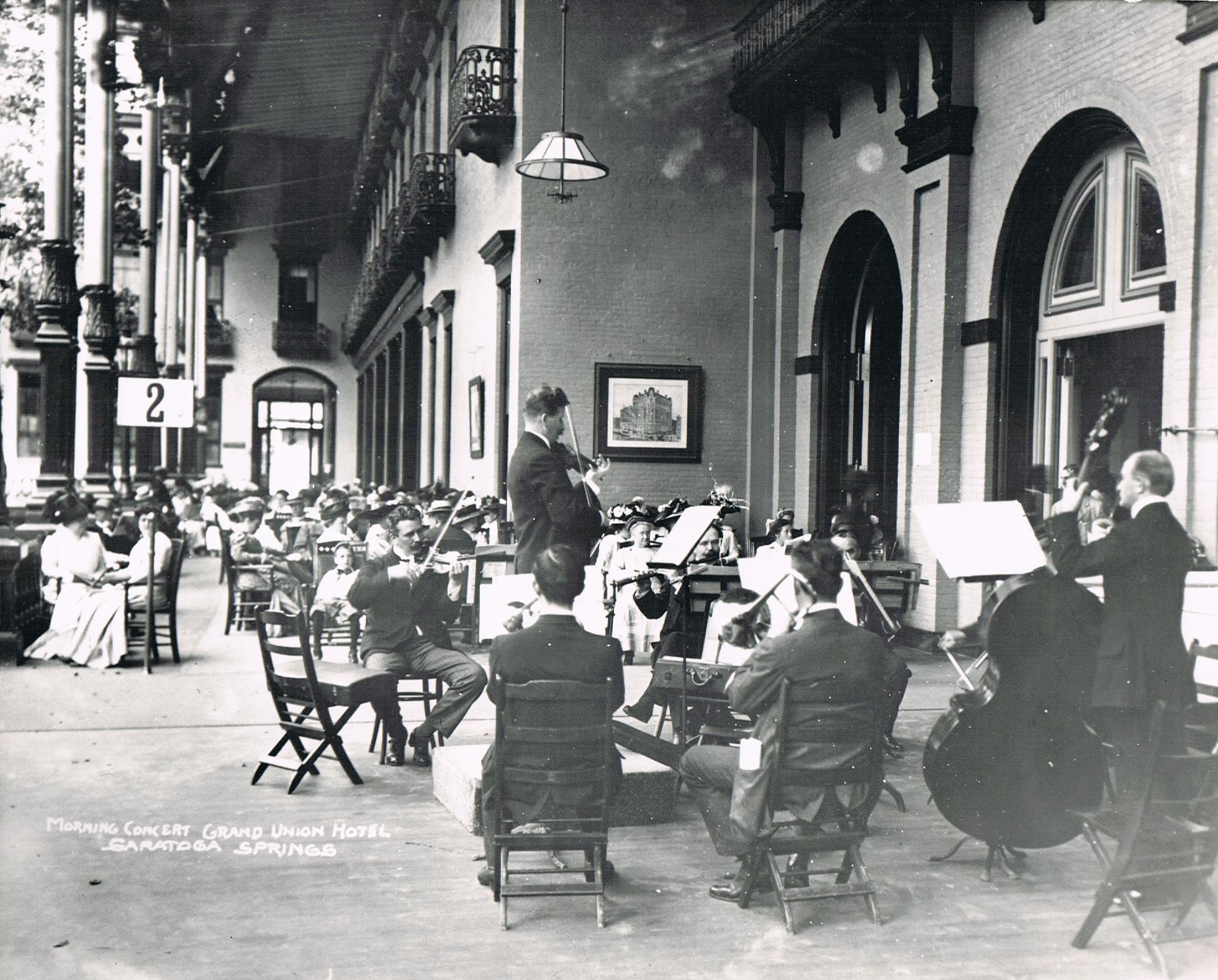 The grand hotels of old Saratoga always competed to provide their guests with the best in food, music and entertainment. This image is from 1905 showing the famed conductor, Victor Herbert and his orchestra providing music for afternoon tea at the Grand Union Hotel where he served as music director.