For more than a century, countless residents and visitors have enjoyed the Spirit of Life & Spencer Trask Memorial in Congress Park. It is where you see ducks take a swim in the reflecting pool, kids play, friends meet for lunch, happy couples take engagement photos, visitors admire the golden bronze sculpture, beaming brides and grooms pose for wedding photos, recent graduates celebrate achievements, families take photos to memorialize their visit, dogs pose for a photo for their owners, community groups gather together to rally for a cause, and individuals sit peacefully reading a book, drinking a coffee, or reflect on their day. 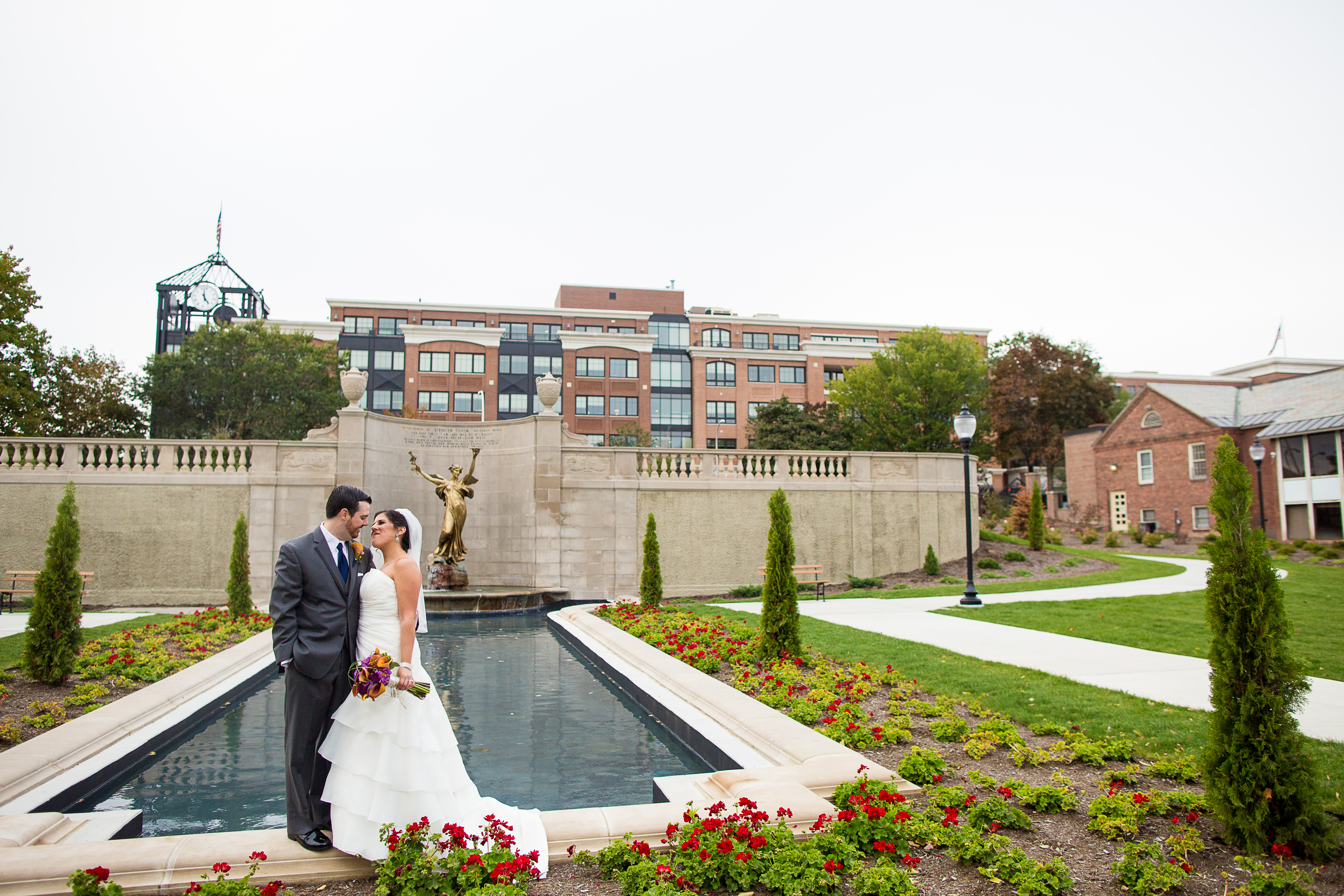 While many over the years have gathered at the Spirit of Life & Spencer Trask Memorial many may not know its history or significance.  Spencer Trask was a wealthy financier, philanthropist, and venture capitalist.  He supported the unknown, struggling inventor Thomas Edison, providing financing for his world-changing invention of the light bulb.  Spencer also was one of the financiers who rescued the New York Times from bankruptcy, serving as president from 1897 to 1900.  He and his wife Katrina, a writer, acquired a country estate in Saratoga Springs in 1881.  Following the death of their four children, they bequeathed their fortune and the estate that they had named Yaddo to establish a retreat for artists.  Yaddo, a National Historic Landmark, continues to host upcoming and award-winning artists.

While the Trasks are most well-known for Yaddo, few in Saratoga Springs may know the critical role that Spencer Trask played in preserving our city’s natural spring waters.  Prior to the turn of the 20th century, the springs were being depleted at a frightening rate by gas companies who erected large unsightly extraction plants to pump hundreds of thousands of gallons of spring water daily to extract carbonic gas for use in carbonated drinks.  With no regulation to deter overuse of the springs, Saratoga Springs was not only going to lose the park-like setting
of the springs, but the natural springs that made our
city famous.

As the springs started to be compromised and run dry, Trask formed a committee of local citizens to “protect and preserve the mineral springs of Saratoga for prosperity.”  In 1908, the Anti-Pumping Act, introduced by Senator Edgar Brackett and Assemblyman George Whitney, was passed to prevent the pumping of the water and extraction of gas from the springs.  However, the gas companies challenged the Act and continued pumping.  Trask again led the effort by the Committee of Concerned Citizens to ask the Legislature to bring all of the springs under the State control to ensure their protection.  Their efforts were successful.  In 1909, legislation was passed to create the State Reservation at Saratoga Springs (today the Saratoga Spa State Park), ultimately resulting in the springs being saved from exploitation. The governor of New York appointed a three-member commission, including Trask, to select and locate the lands for the reservation. Trask was traveling to New York City on Commission business when he died in a tragic train accident on New Year’s Eve 1909.

In 1913, Katrina along with George Foster Peabody, close friend, and business associate of Spencer, commissioned a memorial to honor her late husband’s efforts to preserve the springs.  The Spencer Trask Memorial is the product of the artistic collaboration of noted American sculptor Daniel Chester French, architect Henry Bacon, and landscape architect Charles Leavitt, Jr.  French and Bacon are most well-known for their collaboration at the Lincoln Memorial in Washington D.C., which began in 1914.

In the summer of 1913, French and Bacon visited the site for the memorial in Congress Park, where the Congress Hotel had recently been demolished.  Upon visiting the site, French and Bacon immediately began to develop designs for the sculpture and architectural setting.

In November, French shared his first sketch, The Spirit of the Waters.  It was quickly dismissed because it was too solemn and did not reflect the large, vigorous, buoyant personality of Trask.  In a letter to Katrina from French, dated January 24, 1914, he explained his new sketch.  “I had in mind the spirit of buoyancy and life … and I have tried to suggest the return of the waters to Saratoga.  The figure holds aloft in her left hand a basin from which water will flow; in the other hand I have suggested a branch of pine, which you told me was Mr. Trask’s symbol.”  It was in this same letter that French explained that this figure could not be made of marble as she had hoped but must be made in bronze. 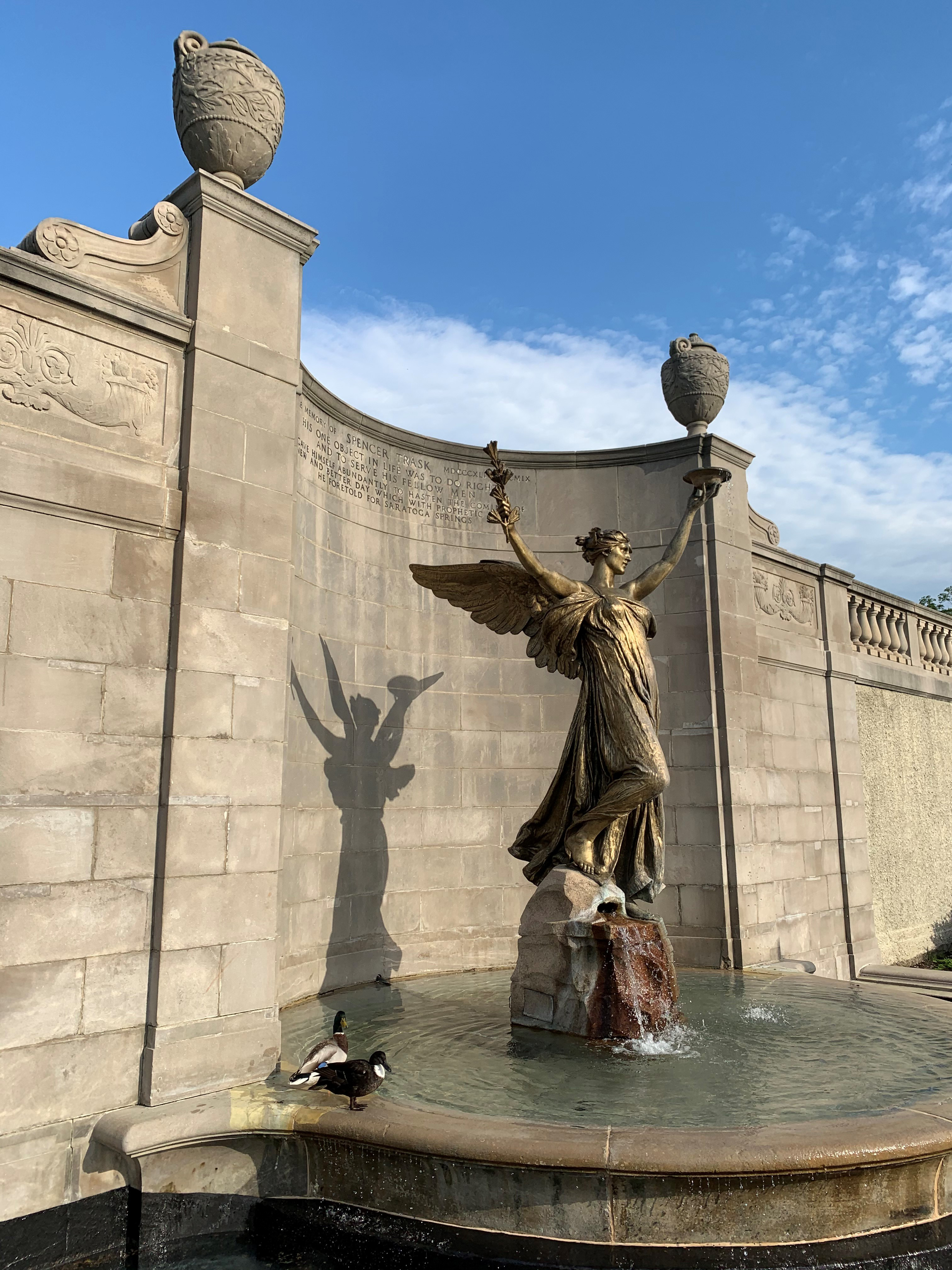 While Katrina was pleased with the design, French responded to her disappointment that the figure must be cast in bronze in a letter dated January 29, 1914, “you will be interested to hear that I have been experimenting with one of the bronze foundries with a view to finding an alloy that would not turn black and we think we have one that will hold a beautiful gold bronze color.”

It was Charles Leavitt, Jr., a self-described “landscape engineer” who was responsible for the landscape setting for the memorial, which encompassed the entire northwest quadrant of the park.  Leavitt was nationally known for his designs of school campuses, cemeteries, and parks.  He also designed private estates, including the Long Island estate of William C. Whitney, and race courses, including Belmont Park, and the significant changes at the Saratoga Race Course at the turn of the century.  The details of Leavitt’s plan provided open views of the sculpture, curving pathways, a rambling stream leading to a lagoon, lighting, and plantings with a variety of texture, color, and size.

The architectural surround designed by Bacon and the landscaping was completed in 1914 and the Spirit of Life sculpture was placed in 1915.  The Spirit of Life & Spencer Trask Memorial was unveiled and gifted to the city on June 26, 1915.  It was the first public appearance made by the first mayor, William P. Butler, following Saratoga Springs being incorporated into a city. 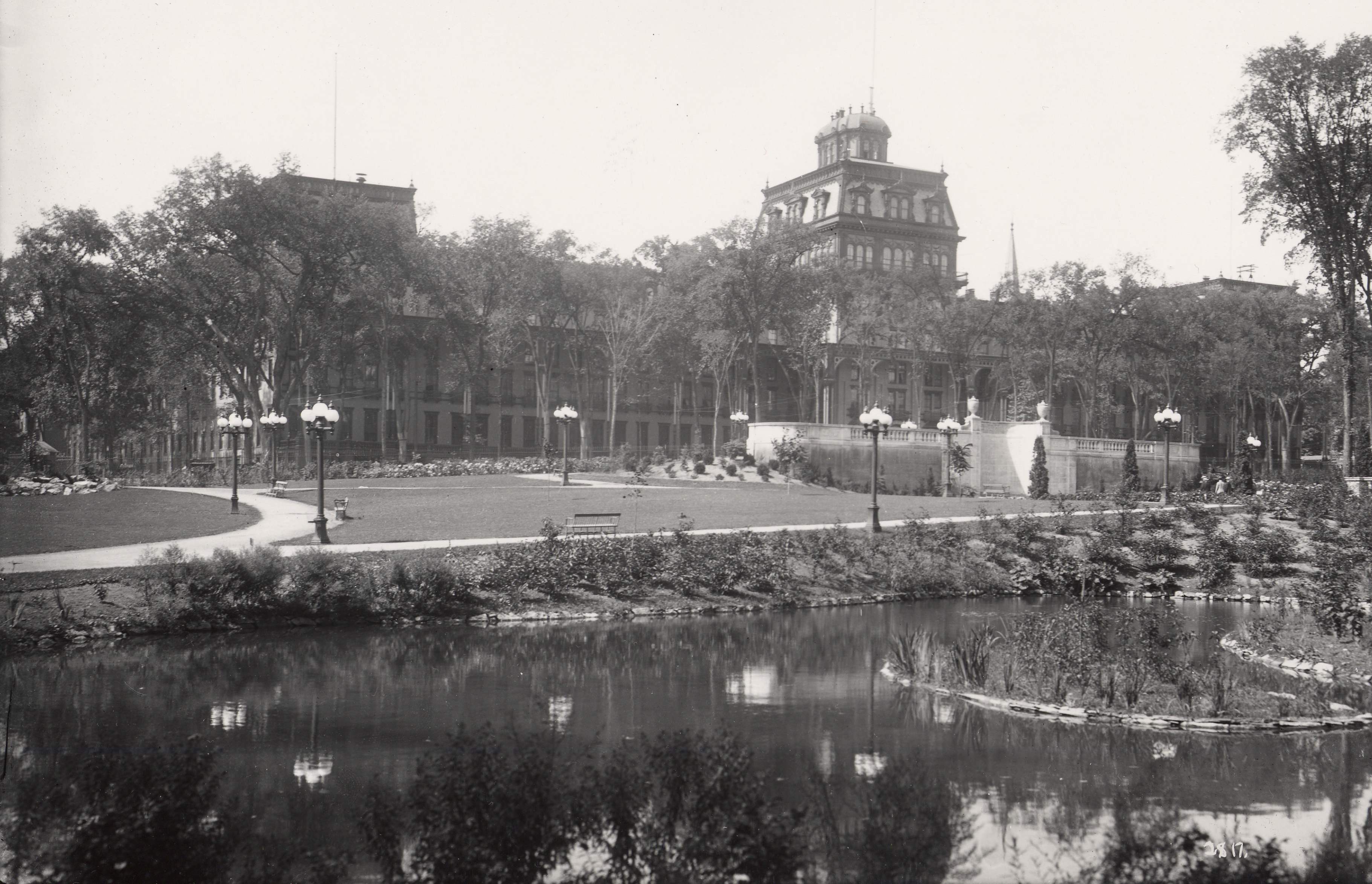 Over time the Memorial deteriorated – the sculpture’s protective coating began to fail, insensitive repairs were made to the architectural surround, and landscape features were lost.  In 2010, citizens raised concerns about the poor condition of the large white pines that served as the backdrop of the Memorial, fearful that they would fall and damage the priceless Spirit of Life sculpture.  In 2011, the Saratoga Springs Preservation Foundation took initial steps to restore it.  The following year an official partnership with the City of Saratoga Springs was formed, each providing funding and resources towards the project.  The $750,000 project included restoring the sculpture to its original intended golden color, repairing the architectural surround, and restoring the landscape features - the wide curving pathways, the rambling stream, lighting, benches, and plantings.  The completion of the restoration project was celebrated on the 100th anniversary of the dedication of the Memorial, June 26, 2015, with over 500 people attending and spontaneously singing “Happy Birthday.”

The Saratoga Springs Preservation Foundation has remained committed to preserving the Spirit of Life & Spencer Trask Memorial.  Since 2015, the Foundation has organized volunteers to assist the City of Saratoga Springs to help plant the 700 tulip bulbs, dead-head the geraniums, and weed the surrounding landscaping. “It is an honor and privilege to do anything to help preserve the beauty and history of Saratoga Springs. Since gardening is a passion of mine, my work at Congress Park is a perfect fit,” said dedicated volunteer Ron Thompson.  Kristi Krulcik, who volunteered for 518 Day last year, said “After I learned about the rich history and meaning of the Spirit of Life & Spencer Trask Memorial, it felt like a unique opportunity to help maintain the surrounding landscape. I really enjoyed meeting others who were also passionate about preserving Saratoga’s history.” 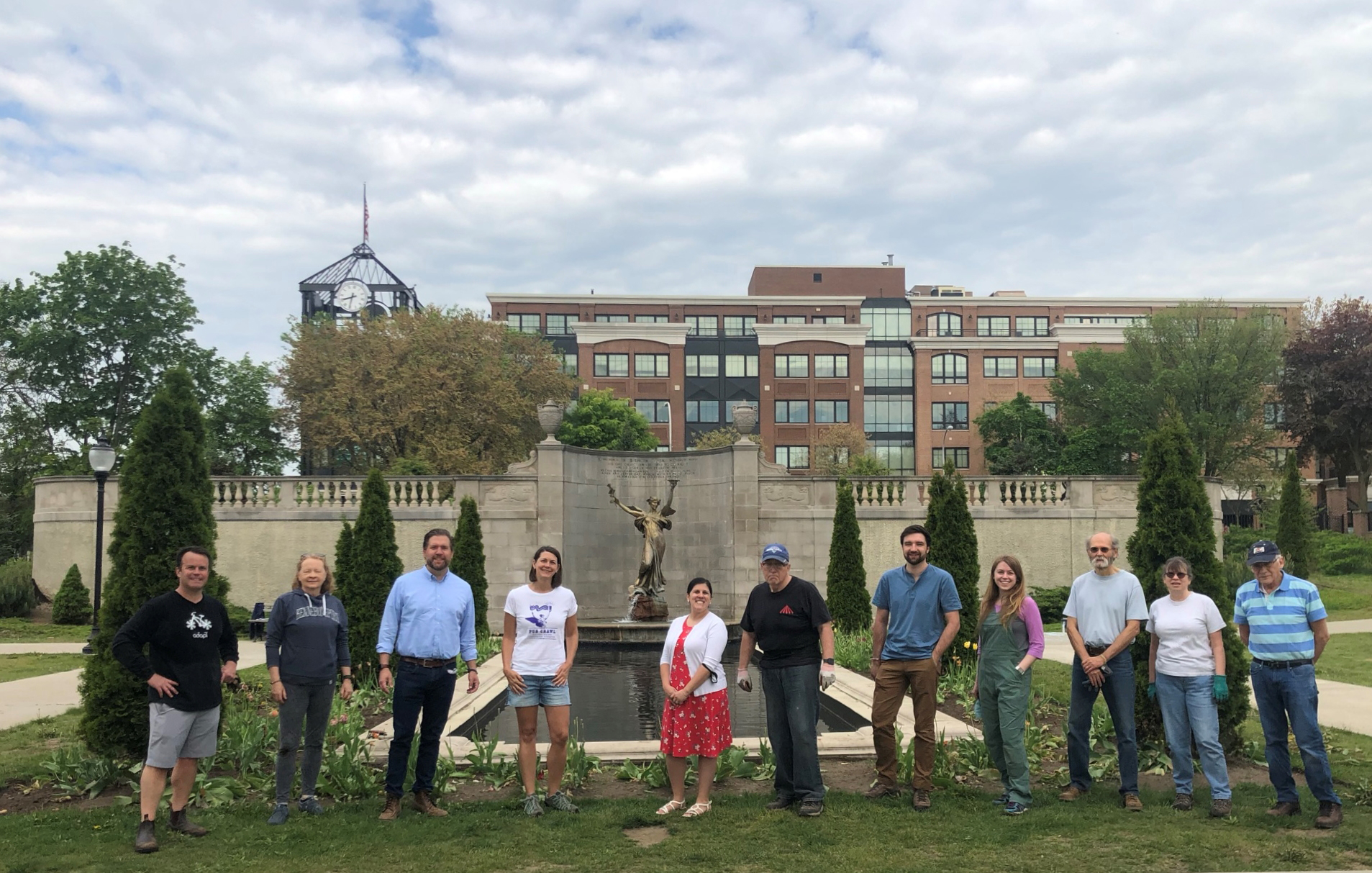 The Saratoga Springs Preservation Foundation is fortunate to have dedicated volunteers, but it is always looking for more to help.  To learn more about volunteering at the Memorial or other opportunities, please visit saratogapreservation.org or call 518-587-5030.

- The inscription of the Spirit of Life & Spencer Trask Memorial