I am taking a break from writing about livestock and all the care that goes with them on your homestead to talk about the farmhouse. Nowadays the farmhouse look is all the rage, but there is so much more than whitewashing everything and having a large “farm sink” to recreating a farmhouse. While a real farmhouse may have had a few white walls, I can assure you, that is as far as we dared to go, choosing the color white! There were grain, hay, and soil samples on the counter waiting to be brought down to the local Cooperative Extension office or lab for testing. The back door had a kickplate on it along with a boot brush to remove excess mud, and our rubber boots stayed on the porch to cut down on the smell of manure, while our floors were always a dark color to cut down on the showing of wear and dirt. The kitchen table was the meeting room, family desk, keeper of the newspaper, and on Sundays and holidays it was actually our dining room table! Somewhere in the house was a makeshift holding pen to bring in a sick calf, lamb or whatever needed the overnight intensive care unit. These old farmhouses had so much more to them than just character, they had reason and purpose to their design and layout, such as the direction and location of the windows, low ceilings, and many times a second kitchen. Window placement in a house nowadays is focused on a room’s aesthetic, while old farmhouses were looking to maximize natural light, so window placement was more focused on the amount of radiant heat they wanted (or didn’t want) to come from sunlight. Old farmhouses were usually designed to have a southern exposure, so the majority of the windows were put on this side of the house. During the winter months, the sun sits lower in the sky meaning sunlight will directly hit these windows allowing for maximum light and thermal heat to come through these windows. This will help heat the house up during the day along with keeping things bright. During the summer months, the sun sits higher in the sky so, you will still receive light but not directly into these southern exposure windows, decreasing the solar radiant heat. Now many modern houses are built this way and there is science to back up the practice we now call Passive Solar. But when you look back at these old farmhouses, they had been implementing these practices long before we had the hard science to back up the ideas. Pretty cool if you ask me!

The new farmhouses of today have beautiful, vaulted ceilings with big, exposed beams, and an open floor plan. I will be honest, I love this look, but it’s not original to a real farmhouse. Most old farmhouses had very sectioned-off rooms and low ceilings. The reason for this, especially where we live in the northeast, was for heat. Having all your rooms small with doors to close them off and low ceilings made it easier to heat your home. Heat rises, and back before we had ceiling fans to push the hot air down, low ceilings were how they did it. Also, being able to section off areas of the home allows people to regulate room temperatures easily. This is also why many rooms had fireplaces or stoves. The farmhouse I grew up in had extremely low ceilings. My father wasn’t a tall man and standing at 5’6” he could easily touch the ceiling flat-footed. While my dad did pull down the lowered ceilings to expose the beams, they were far from vaulted or cathedral style. At least now a tall person doesn’t have to bend down to walk through our house! 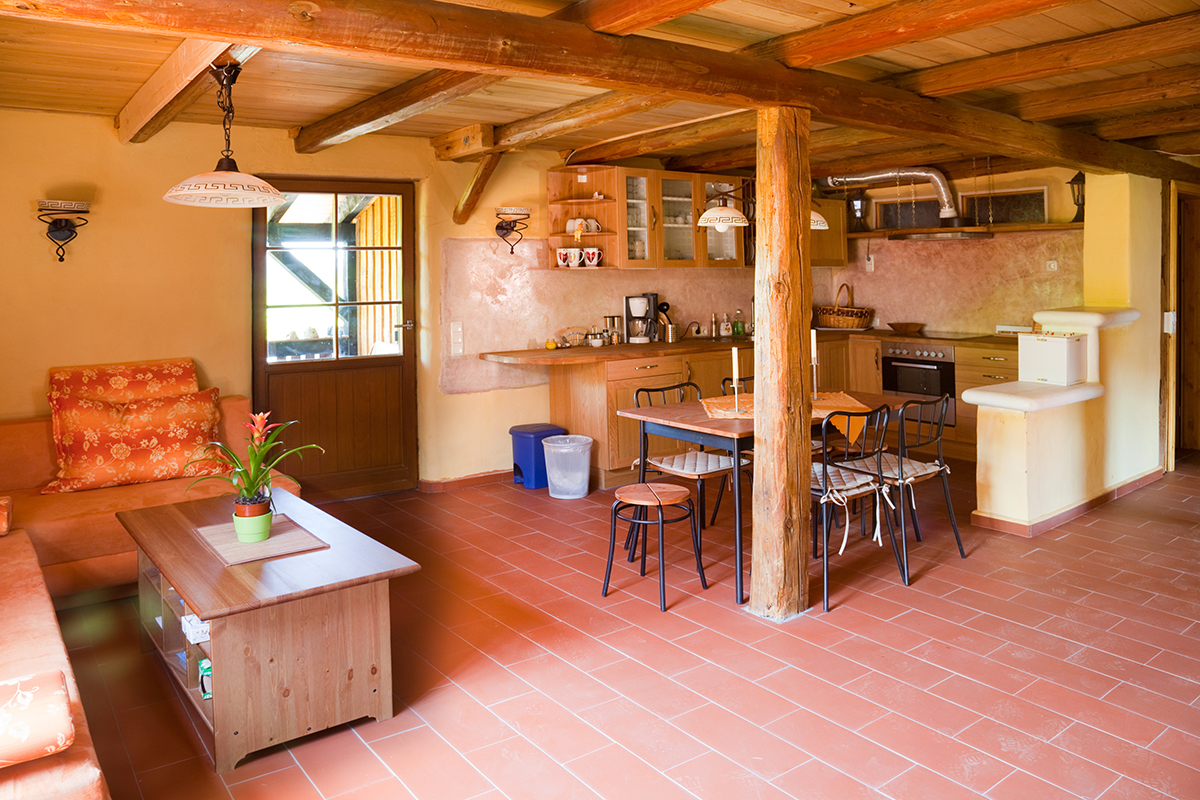 Now you did read it correctly, some farmhouses had a second kitchen. The reason for the second kitchen is very much for the same reason for the low ceilings, because of the heat, but now it’s to keep the heat out. You know the old saying, “If you can’t take the heat get out of the kitchen.” Well, that’s exactly it. Cooking in the kitchen creates a lot of heat and did help heat the house in the winter but, during the summer months that was the last thing you wanted - to make the house even warmer. Therefore, many farmhouses would have a “summer kitchen,” “open kitchen,” or an “outdoor kitchen.” These kitchens were usually outside the home or placed on an outside wall, allowing them to cook and create little added heat in the home. Cooking in the summertime was crucial for the rest of the year. Summer into fall is when we harvested most of our fruits and vegetables which didn’t keep all year long. So, people had to cook and preserve them, so they could eat for the remainder of the year, which meant cooking all summer long - no matter the heat!

Anyone who has ever lived in or renovated an old farmhouse can tell you, there are many things that were done that were really intuitive and seemed advanced for their day. And there are other little quirks that just make you laugh and add that farmhouse charm to the home. And those little parts of our past and history are what make those old farmhouses so great!