Since the beginning of 2012, the light bulb has never been the same. With the phase out of 100-watt incandescent bulbs followed by the 75, 60 and 40 watts up to 2013, homeowners have been trying to figure out how to manage a new way of illuminating their homes. Well, let’s stop head scratching and start learning a little more about what brightens our world and how best to choose the right bulb for your home.

To start, let’s clarify that the days of quickly grabbing a 60-watt bulb and checking out are gone. LEDs are a bit more complex with several elements to consider…Let me explain…When LEDs were being phased into our everyday living, we began to see “lumens” as the indication of which bulb to choose. However, it isn’t all that simple. Since 2011, the Federal Trade Commission announced new labels on packaging with “Lighting Facts,” usually found on the back of the box just like “Nutritional Facts” for food packaging.

Just in case you were a good recycler and already put that box out…I’ll share mine!

Now let’s work our way down that label together! 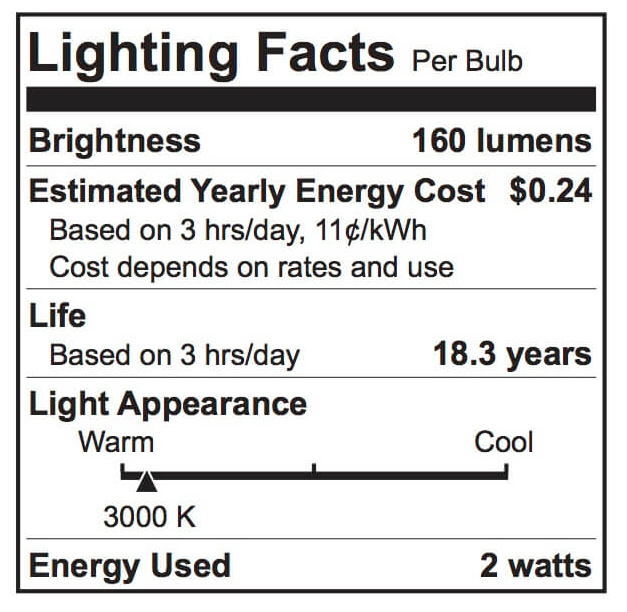 Brightness, noted in lumens, is simply just that, how bright the light emitted from the light source will be. It is not the same as watts. Don’t worry, you’re not alone in that. Think of it this way, lumens are the same measure of brightness for LEDs and incandescent bulbs alike. Watts, which I will discuss shortly, is a measure of energy. If you know the brightness, or lumens, of the incandescent bulb you used to have, find the same measure in a new LED option. To help you with this mental mind twister, try using this simple conversion chart. One caveat, these measurements are based on average bulbs available on the market today. Actual light output may vary by product.

The next line is Estimated Yearly Energy Cost. I think this one is pretty self-explanatory. It’s a good unit of measure when comparing like bulbs for how far your dollar will go. Depending on your energy supplier, this estimated cost may vary. A measure of life follows and specifies the longevity of the bulb you are sourcing. Both of these are based on a use of 3 hours per day. Again, this is a great resource for comparing cost and value when sourcing LED bulbs for purchase.

Light Appearance is a big factor and needs to be considered as strongly as lumens. Measured in kelvin (K), this number reflects the color of the light ranging from warm to cool.

Typically, we are most used to 2700K from an incandescent bulb. It has always had a warm glow and made our home feel cozy. I remember when the LEDs were first introduced for everyday use, many of my clients complained that they disliked them. They said that everything in their house looked cold. I would explain that they probably purchased a 5000K bulb, with a high lumens rating on the box, to get that same brightness they were used to. However, they purchased such a cool bulb, it changed the overall appearance of their interiors. This is the same misunderstanding many homeowners still have. I know what you're thinking, daylight is “blue?” Yes, without getting technical, think of the blue sky rather than the yellow of the sun. There are lots of different uses for each color but it is very important to remember to maintain a singular kelvin for areas that are open to each other. One example would be a great room. All the light bulbs from the kitchen undercabinet lighting, dining table pendant all the way to the cans over the sitting room should be of equal Kelvin. If not, you’ll see the color difference when the lights are on, ranging from a yellow to blue. The one exception is in a closed off space such as a bathroom or basement area. I purposely changed the light color in a windowless half bath project to 5000K to bring out the purple tones of a vanity stone as the warmer light saturated the color and made it look dull. Even in grocery and jewelry stores, they tend to use bluer lights to enhance the color of their goods, making them look more fresh or full of sparkle…Now you know their secret!

Lastly, Energy Used will measure the number of watts required to turn your light bulb on, as mentioned earlier. This little number, along with the elimination of millions of metric tons of carbon emissions, is the reason why the Department of Energy embarked on changing our light bulbs from incandescent to LEDs. You see, with LEDs, we can capture the same amount of light while using significantly less energy as shown in the LED Conversion Table. For instance, a 100W incandescent bulb, with an output of 1600 lumens, will now only consume 18.5 watts of energy to produce the same number of lumens or brightness. Think of it this way, have you ever flown over a large city and marveled at all the lights below? With LEDs, those beautifully twinkling bulbs save millions of dollars for consumers each year. Quite a bright idea!

LEDs now come in all sorts of bases as well, allowing our homes to be fully converted to lower watt bulbs throughout, resulting in energy savings. You can even secure frosted LEDs if you prefer not to see the interior of the bulb. There are so many options to choose from, even LED tape, with its tiny diodes, allows us to illuminate smaller spaces once thought impossible. I could easily write another article on types of bulbs, it’s a wonderland of illumination… full of fun shapes and sizes!

One note of caution, however, if you have dimmers in your home, be sure you purchase LED bulbs that are noted as dimmable. If there is no indication on the box, it is best to presume they are not dimmable. Look for these references on your box front.

Now that you know how to read your light bulb box, be sure to take the time to look over the details. Also invest a little time to discover which color light you prefer most in your home. I tend to have a few different kelvin bulbs on hand to experiment with color. Get illuminated Saratoga, and see your home in a new light!