CONGRESS PARK BANDSTAND
Congress Park has long been known as a site for many activities including musical events. This was the first bandstand that existed in the park and was replaced by the War Memorial located in the same location today. It’s curious that today’s well-received “Summer Concerts in the Park” series from the Visitors Center continues a tradition of over a 150 years of music in the park

Uncovering the history of our city is a wonderful but winding path. Discovering the history, the legends and the lore of Saratoga Springs can be done in many ways, with the traditional research of primary sources and well written accounts of many aspects of the city, being the standard means of discovery but not the only one. Saratoga Springs is very lucky to have many groups and organizations that help tell the story of the city and help to provide a variety of delivery systems. A few years ago, members of the Special Assessment District launched a huge project to redo the signage in the downtown area to better direct traffic and visitors to attractions in the city. Under the leadership of Chairman Harvey Fox, the signage was updated as well as the inclusion of ten special informational kiosks on Broadway that would help direct people to area businesses. The back side of these kiosks had space that allowed for different topics in the history of the city to be written and displayed. The committee asked me and a few other historians to write the history sections that are today found on those kiosks.

As a long-time educator, I always searched for new ways to involve students of all ages in the discovery of their hometown. This Spring an idea for a new presentation was discussed with me and I immediately fell in love with the idea of a Scavenger Hunt in the Broadway area of Saratoga Springs. Years ago, I assisted in the writing of a Scavenger Hunt with Sheila Sperling that was well received and used for several years by many different groups in the city. Eventually the Broadway landscape changed and many of the questions in the Hunt were no longer able to be answered. When this idea resurfaced again this past Spring it was clear that another version to be written would be an activity that might be exactly what people wanted, so with the help of many, the project started.

The two main players in the project would be the Saratoga Springs History Museum, located in the Canfield Casino and the Heritage Visitor Center located at 297 Broadway in the beloved Drink Hall. I contacted the Director of the Visitor Center, Karen Verrigni and we discussed the concept of a Scavenger Hunt on Broadway that would involve taking historical information from the kiosks found on both sides of Broadway. The concept was simple. Visitors could get a copy of the Scavenger Hunt at either the Saratoga Springs History Museum or the Visitor Center. The visitors could then travel to the ten kiosks on Broadway to read and gather information that would allow them to complete the Hunt. The document was designed to have visitors start their hunt on the westside of Broadway near the Visitor Center and then systematically visit each kiosk on the westside, then cross Broadway to continue down the eastside of the street to complete the hunt. Upon completion the participants could again visit their starting point to “correct” their Scavenger Hunt to access their knowledge and ability to complete the questions from the information on the kiosks.

The Scavenger Hunt was written by me and Karen Verrigni. We asked many individuals and groups to “test drive” it and provide feedback that would help to guide the final writing of the product. As we were writing the Scavenger Hunt and using the area of Broadway to collect the information from the informational kiosks, I was reminded of the importance of Broadway for over 200 years in Saratoga Springs’ history. Broadway has always been the heart of the city and the place for so many famed visitors to stroll and “see and be seen” over the summer season. Today the kiosks provide the written history of the city for the last 200 years for old and young alike to remember, or learn for the first time! 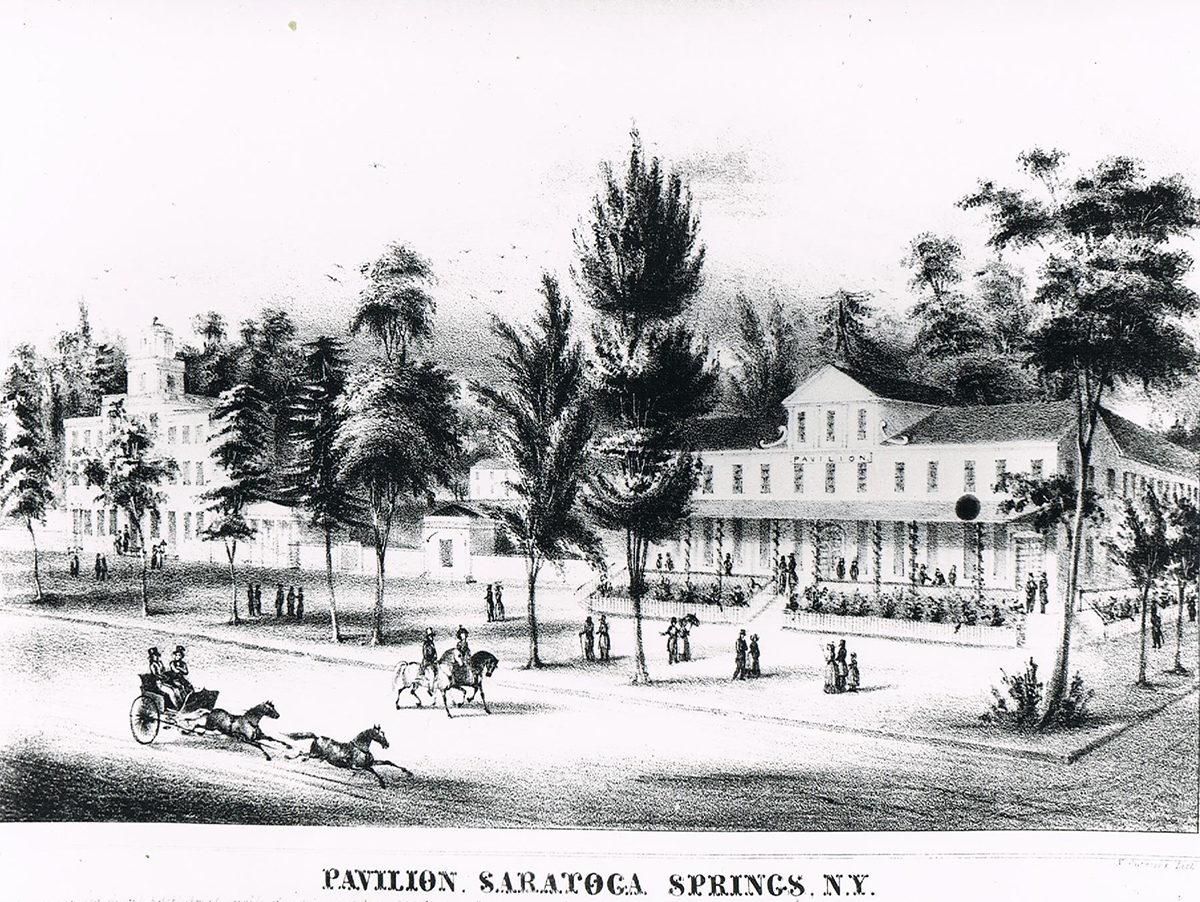 The text on the kiosks helps to cover many different topics of the history of the city and are supported by important images from the famed Bolster Photographic Collection. The kiosk design was intended to engage visitors as they walk Broadway today. An aspect of modern life shows us that many times individuals are walking with a purpose and not strolling as was popular in the 1800s. My hope is that the Scavenger Hunt would slow the pace and give visitors the opportunity to read and learn from this activity.

The topics in city history covered by the hunt are all encompassing and will provide visitors with a good initial look at the history of our great city. Topics such as mineral springs, horse racing, the grand hotels and the description of the original upper and lower villages that would give rise to one day, the city of Saratoga Springs.

This Scavenger Hunt has proven to be a big hit with locals, visitors, business groups and families. Depending on the speed of the group this activity could be completed in just one to two hours. In fact, there is nothing that dictates that it can’t be an entire afternoon event that would allow for shopping, lunch or dinner as the work is completed. Plan a date to do this fantastic Scavenger Hunt. Get family, friends, or co-workers to form teams, or work together to have a really fun time in downtown Saratoga Springs. Enjoy the learning and the Hunt but don’t overlook the wonderful restaurants and unique shops that comprise our award-winning Broadway.

The Scavenger Hunt can be picked up at the Visitor Center Tuesday through Saturday from 9 a.m.-5 p.m., or at the Saratoga Springs History Museum from 10 a.m. – 4 p.m. seven days a week. So, consider getting out and enjoying this beautiful weather as well as the great assets of our wonderful businesses on Broadway while learning the detailed history of our city. The history of a community is part of the “glue” that holds a city together and allows for future improvements by people that care about preserving their city. It’s never too early to start the children on the path of learning the history of the city and reminding adults about their heritage. Try it... I think you will like it! 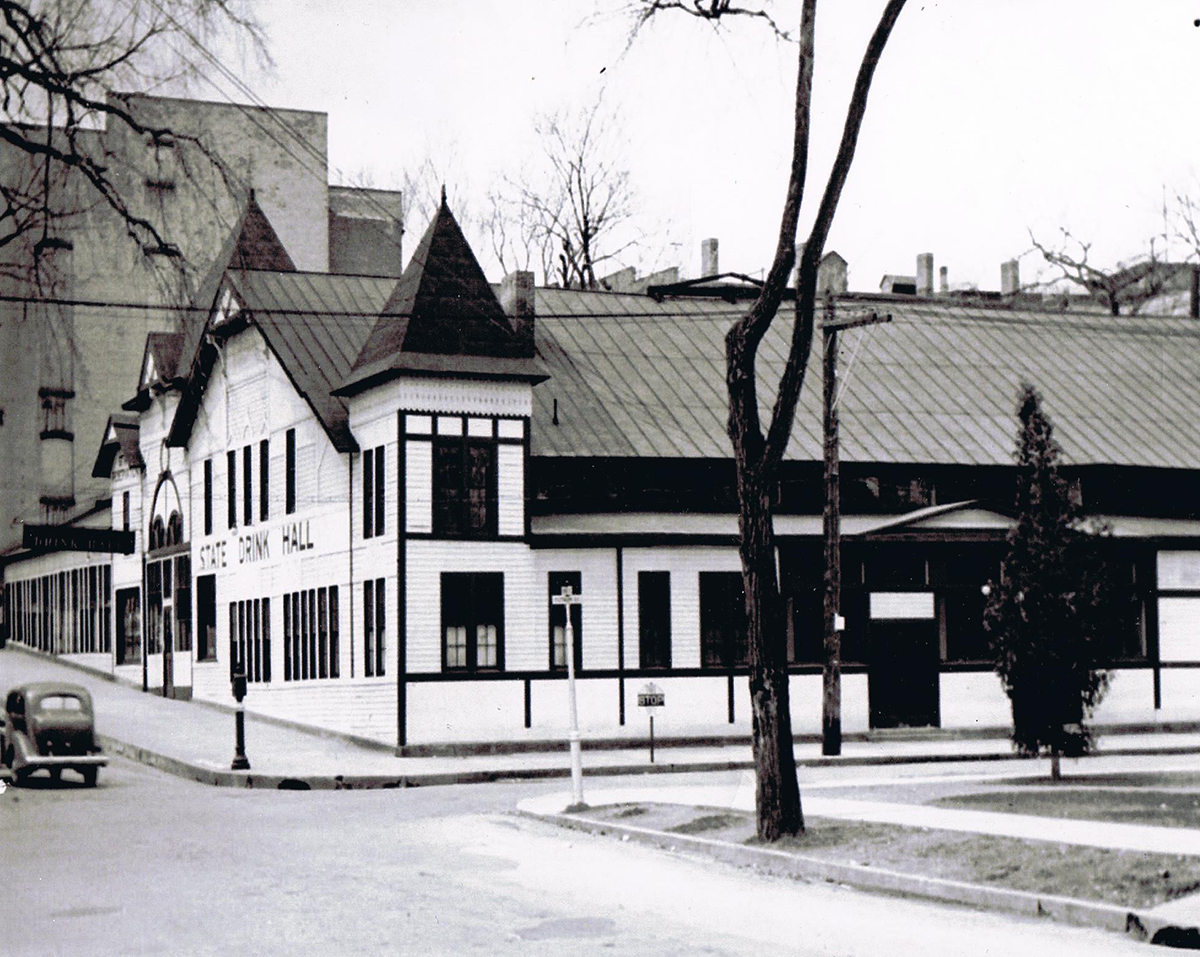 A popular social practice in the later part of the 1800s and part of
the 1900s was to visit “drink halls.” These locations afforded guests
with the opportunity to drink mineral water while meeting friends.
This drink hall was the Hathorn Spring Drink Hall and was located on
the west side of the intersection of Spring and Putnam streets.
The location today is a parking garage. 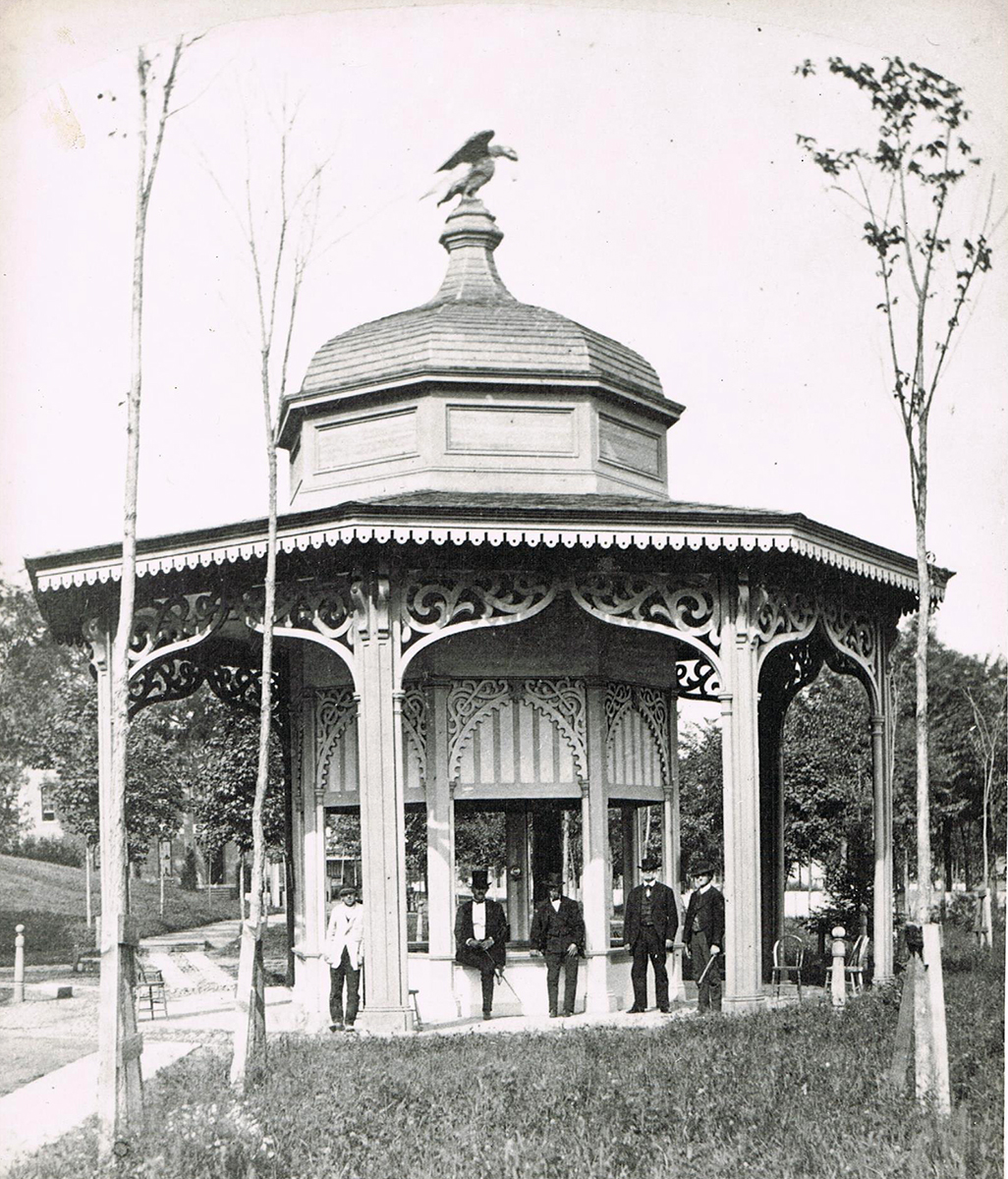 The High Rock Spring was the founding location of the city because
it was the site where the first European visitor, Sir William Johnson visited in 1771.
This is the way the spring looked in 1876 with the most elaborate cover that ever graced the site.