Summer in Saratoga. That rather short sentence means many things to many people in Saratoga Springs. To me as a young boy, growing up in the city, it meant a variety of things. As a student, it meant summer vacation, pick-up games of baseball and riding my bicycle all over the city. As an older boy and eventual man, it meant racing season and therefore the racetrack. The city always seemed to come alive with the races each summer and you were reminded of exactly how historic and special the race meet was every summer.

To many people, the year 1863 is thought to be the beginning of racing at Saratoga, but it started even before that date. Many accounts tell of street racing in the 1820s when summer visitors were eager to prove exactly whose horse was fastest even if it meant the streets were “the track.” Locals were quick to try to stop this very dangerous activity, but it seemed to persist for years. A New York State law in the 1800s prohibited organized horse racing in the state except at the State Fair each year.

In September of 1847, the New York State Fair was held in Saratoga Springs. The site of the fair was near the present-day Saratoga Race Course. As preparations were made for the opening of the fair, a racetrack was constructed. In typical Saratoga fashion, races were held all summer prior to the fair’s opening and billed as “speed trials,” not races. Yes, the desire to race horses at Saratoga was alive and well at a date prior to 1863!

In 1863 when John Morrissey and a small group of others prepared to try Thoroughbred racing at Saratoga, it is no coincidence that they used the old track that we know today as Horse Haven. August of 1863 was during the height of the American Civil War and horses were scarce. The racing “experiment” was held August 3-6 of that year with only a few horses available for racing. Time trials were held and an eventual winner was crowned named Lizzie W. The experiment had been run and the results were conclusive. Yes, the public would support horse racing in the city. A total of 15,000 people attended those first races, each paying a $1 admission fee. John Morrissey, along with investors and racing enthusiasts Leonard Jerome, John Hunter and William Travers decided to buy land across the street from Horse Haven and construct a new track that would open in August of 1864. Thoroughbred racing at Saratoga was here to stay, but it does not mean there wouldn’t be problems in the future.

The original group of investors formed the Saratoga Association and raced horses each summer on the new site for many years. They added more comforts for visitors to make the daily experience better and supported honest, fair races for horse owners. The model was solid and supported a high level of racing for years at Saratoga. We must remind ourselves that most visitors to Saratoga in those days stayed in the grand hotels that offered their biggest meal of the day at 2:00 p.m. The hours of racing reflected that fact and were shorter each day to allow visitors to return to those hotels for the 2:00 meal. Although not a long list of races each day, the races were fair and continued to be an activity that summer visitors embraced.

In 1892, a new person to the race scene at Saratoga bought the operations from the Saratoga Association. This new person was Gottfried Waldbaum. Waldbaum was a notorious track owner who ran the outlaw Guttenburg Track in New Jersey. The operations of our wonderful Saratoga track began to change. Waldbaum was famous for fixing races, decreasing racing purses and running crooked race book operations. Waldbaum adjusted the daily start time for the track to suit his personal needs. It didn’t take horse owners long to realize the days of fair racing were gone under Waldbaum and they began to leave the track with their horses. The racing operations at Saratoga were under attack and horse racing began to plummet under Waldbaum’s direction. Racing at Saratoga was really in trouble.

It became clear that our villain in this story would be Gottfried Waldbaum. Now enter our hero W. C. Whitney. William Collins Whitney was born in 1841 as the third child of James Whitney and Laurinda Collins in Conway Massachusetts. William’s father was a longtime member of the Massachusetts House of Representatives. W.C. attended Yale University and then Harvard Law and upon graduation, he was hired by a law firm and worked to curb fraud in New York City. Whitney’s actions curtailed the power of corrupt Tammany Hall and Boss Tweed and he soon became known as an honorable man. Later Whitney was appointed as Secretary of the Navy, under President Grover Cleveland and worked hard to update naval operations. He also held major positions in many companies such as American Tobacco, Metropolitan Steamship, Morton Trust, U.S. Guaranty Trust and NYC Transit System. Later Whitney’s reputation was so strong that he was even considered for the possible nomination as the Democratic candidate for President of the United States. 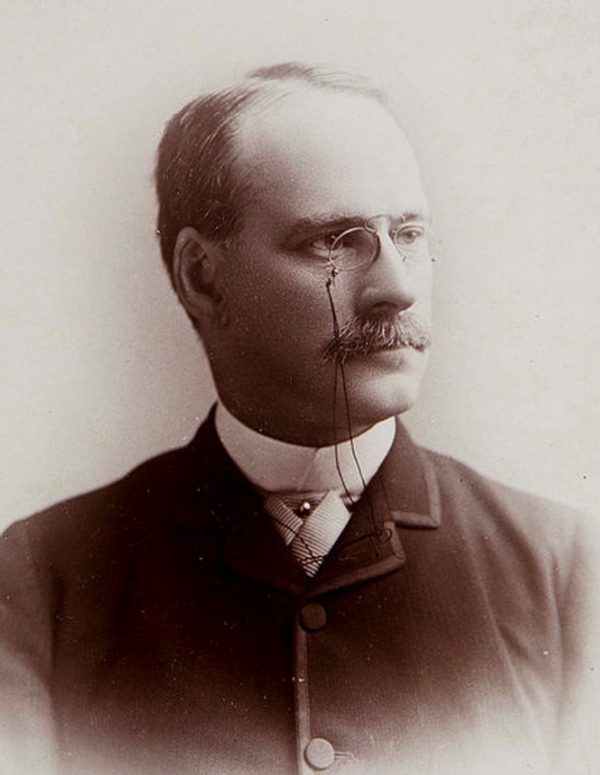 In the mid 1890s Whitney began to scale back his political and governmental actions and began to find joy in horse racing as a hobby. He was introduced to the sport by August Belmont II and worked to form a stable of competitive racing horses. As his love of racing grew, he could not help but realize the decline of the famed Saratoga track, and identified that Waldbaum’s actions were the reason for the decline.

In 1900, W.C. Whitney and Richard T. Wilson Jr. joined forces and purchased the Saratoga track from Gottfried Waldbaum for the price of $365,000. Within a few months of purchase the 1901 racing season was about to begin. Without adequate time to renovate the track, they ran the race meet making soft changes for the first season. Whitney in the first season of his operation, increased racing purses, added more stake races, cleaned up the corruption and only took 5% of the profits from bettors and paid the remainder of the profit back to bettors and made improvements to the track. Horsemen saw the difference and they returned to honest racing at Saratoga in droves. The change was on.

During the 1901 off-season Whitney was able to purchase more land, and do major renovation to the racetrack and the grandstands to make the experience better for visitors and horsemen alike. He added barns, paddocks, re-configured the racing surface, moved and expanded the grandstand, and hired famed NYC architect Charles Leavitt to beautify the track. One of the greatest additions under the leadership of Whitney was to build the Oklahoma training track. Oklahoma has always been a training track. Today Oklahoma is an economic asset for Saratoga County. The training track opens for horsemen near the end of April and operates until the first week in November. Trainers love to send their young two-year-old horses for training at Oklahoma. Because of its popularity, there are large numbers of horses that are stabled there requiring training, care and feed, plus farrier and vet services for months. That infusion of money and jobs into the local economy is well understood.

One of the most common questions I have been asked over the years by locals and visitors to Saratoga is why was the area named Oklahoma? I have researched and asked many questions on this topic and it all leads back to just one basic story. Difficult to prove the story, but I find it interesting to consider. The story tells of a famed horse trainer that was training for a stable that was located on the farthest location of the Oklahoma property. One day while working on the main track, he was greeted by a long-time friend who welcomed him back to Saratoga for another season of racing. The friend asked “Where are you training this year?” The trainer answered “Over there,” pointing to the west. The friend said, “Where over there?” The trainer replied, “It’s so far away it might as well be in Oklahoma!” The story is interesting but not able to be totally proven as truth, especially after asking the family of the noted trainer Sunny Jim Fitzsimmons who also had not heard that story. Such goes the lore of the famed Saratoga Racetrack.

As we enter into the 2022 racing season, we are reminded of how special racing is at Saratoga. I hope everyone will also realize that the continued success of the track is not a given and future heroes like W.C. Whitney may have to come forward to ensure success in the future. Even though W.C. Whitney rescued the track in 1900, the Whitney name continued to be a big part of the track. W.C.’s son was Harry Payne Whitney who married Gertrude Vanderbilt and had a son named C.V. Whitney. C.V. married Marie Louise Schweder (Marylou). C.V. and Marylou embraced the city of Saratoga and showered it with gifts of all kinds. Now that both have passed, we can see many buildings, funds or activities that have the Whitney named attached. The second biggest stakes race of the summer bears their name as the Whitney is still contested at Saratoga. I doubt that W.C. Whitney would have even considered the impact he and his family would have on Saratoga for decades after rescuing the track in 1900, but they did so much. Saratoga Race Course is the finest horse racing location in the country and something we should all be proud to have in our great city. 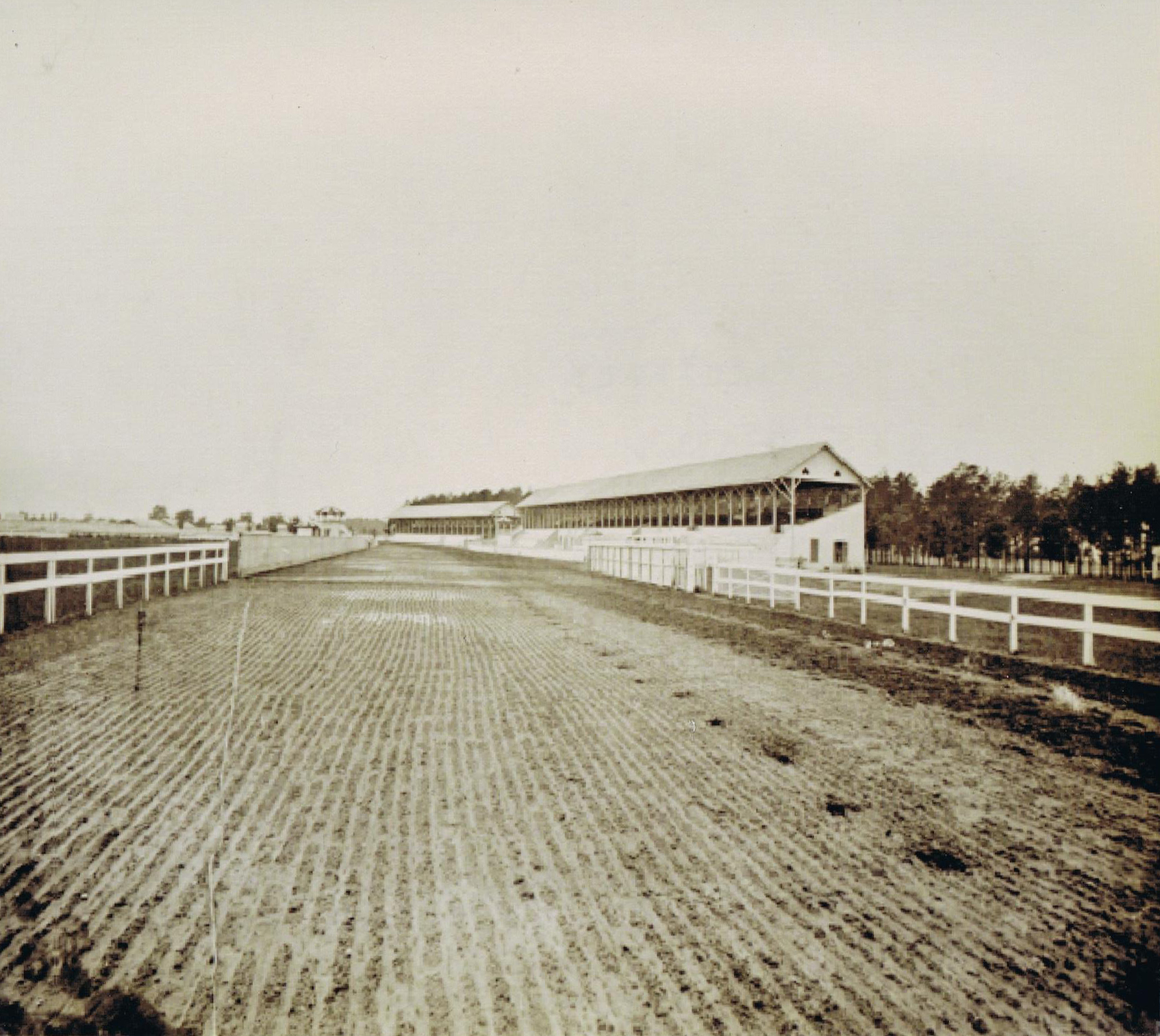 Saratoga Race Track in the 1860s

This image of the track in the early days of operation shows the original grandstands and racing surface before they would be reconstructed in 1901. 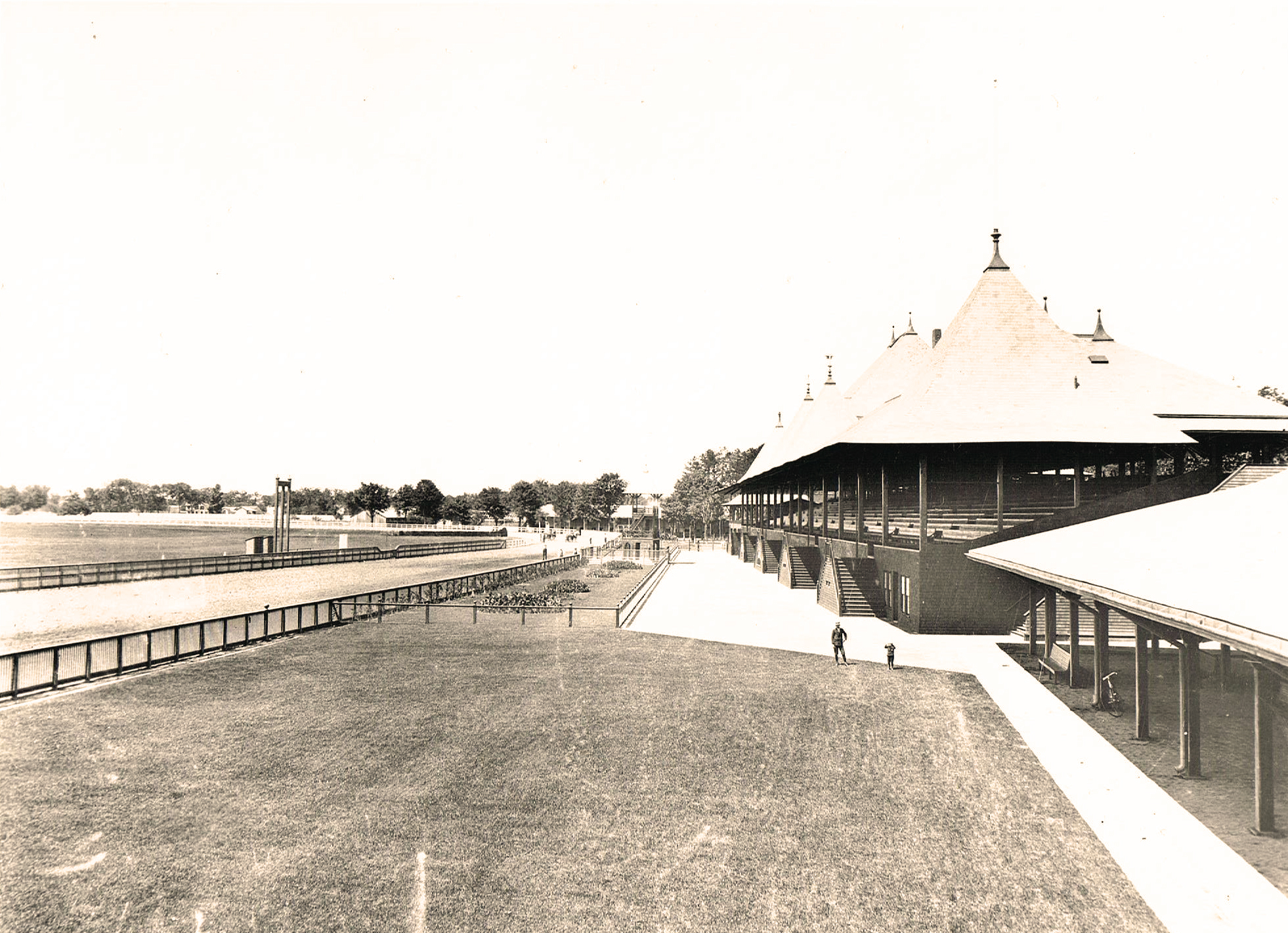 This image shows a track that is looking closer to the configuration of the present-day track. Notice the lower right of the lower open building, which was the betting shed. Before betting windows and tote machines, bets were made with about 100 bookies that were all located in the betting shed. 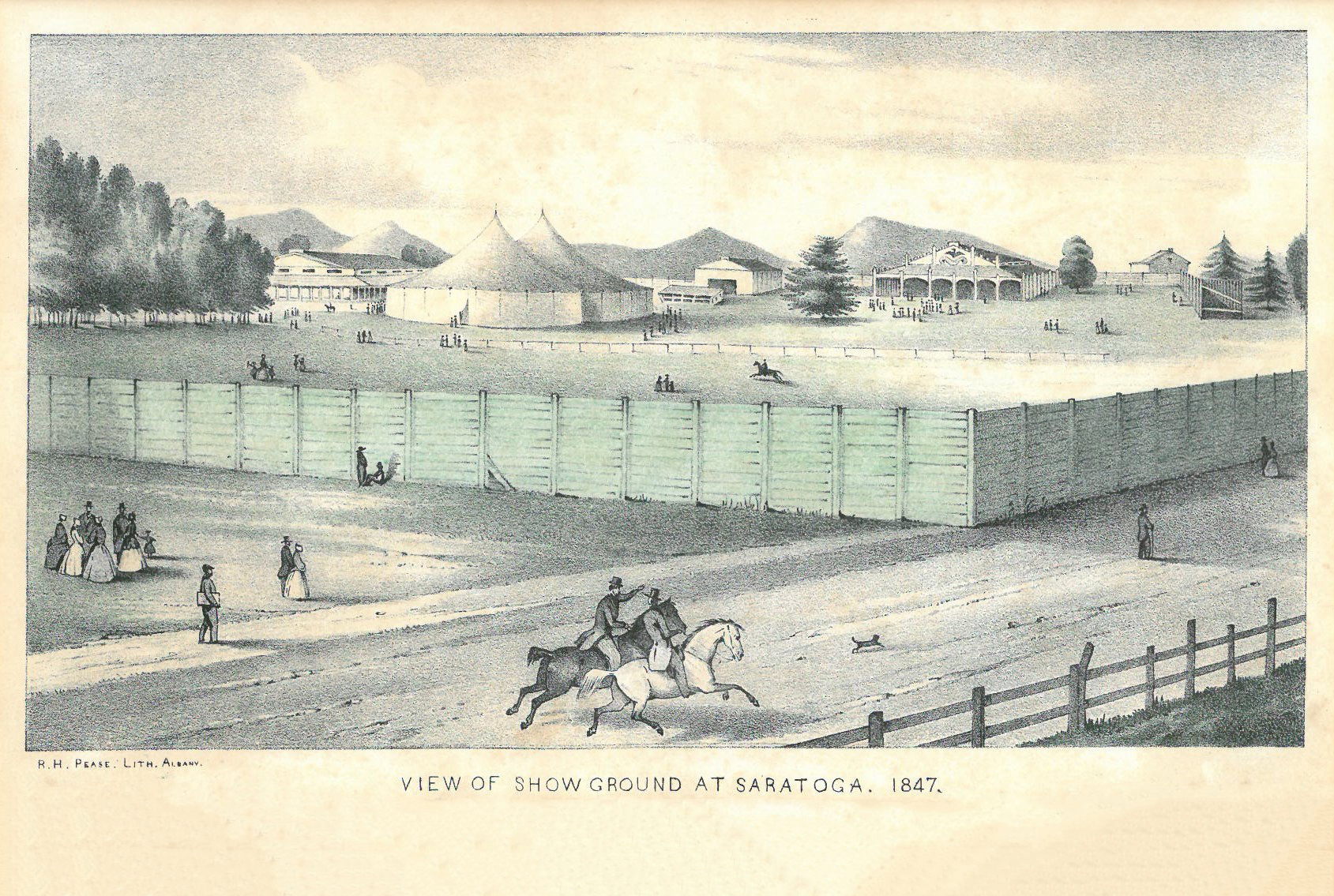 This image shows a drawing of the construction of the 1847 NY State Fair that was held in Saratoga Springs, near the present-day race track. Horse racing was a big draw at the state fair.