The racing organization officially incorporated a few years later in 1865 under the unwieldy name of the “Saratoga Association for the Improvement of the Breed of Horses.” The establishment was an immediate success, and provided the Spa resort an exciting attraction to complement its mineral waters and balneology.

The original incorporators had passed behind the impenetrable veil by the end of the nineteenth century, and the Saratoga Association was managed by the sagacious Fred Walbaum, casting a veil of vicissitude over the betting visitors and community. This squalid condition was rectified in the early twentieth century when an investment group headed by William C. Whitney purchased the operations of the Saratoga Association, and installed solid management. Mr. Whitney also purchased the colors of Englishman George Lambton, Eton blue and brown cap, and raced under them until his death in 1904.

The reins were passed to Francis R. Hitchcock, and he was at the helm of the Saratoga Association when the racing ban created by Governor Charles Evans Hughes delivered a body-blow to the Saratoga economy, causing recently profitable establishments like the Kensington Hotel to fail. Richard T. Wilson stepped into the breach in 1909, and directed the Saratoga Association beyond the excessive government oversight. Mr. Wilson’s roots were in the Confederacy during the War of the Rebellion, as were others such as Duncan Kenner and David Dunham Withers, who realized the balm to heal Civil War was Thoroughbred racing. Mr. Wilson established Saratoga hallmarks such as the Reading Room, the Jockey Y, the Fasig-Tipton yearling sales and the Turf Terrace. He also mentored the stockbroker George Bull, who was made a director of the Saratoga Association in 1915. Mr. Bull was assigned many tasks that called for tact and professional bearing. In 1920 he became the secretary-treasurer, and later succeeded Mr. Wilson after his death in 1930 as President of the Saratoga Association.

George Bull was immediately popular with Clubhouse patrons as he made each one feel they were his guest. His gregarious nature fostered friendship and comradery across the grounds, which developed into fine traditions, such as respecting seating arrangements through nothing more than a newspaper or article left behind. Despite the effects of the Great Depression George Bull stated, “Situated in the foothills of the Adirondacks, a stone's throw from the Saratoga Spa, with its healing waters that are part of Indian lore, this great Mecca of the fashionable, Thoroughbred racing and political world, will again be the nation's summer playground.” 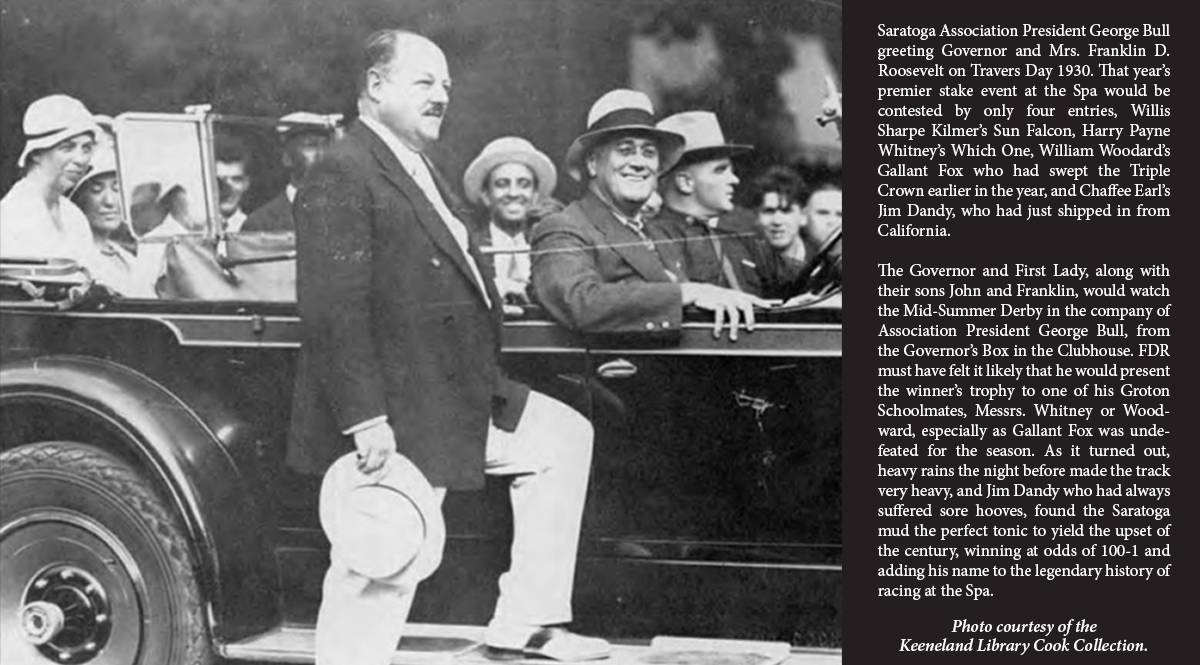 Mr. Bull grew up in New York City, was a 1908 Columbia graduate, and a member of their track team. As a youth he always spent August in Saratoga, enjoying the racing with his father and his uncle, David Dunham Withers, a principal in Monmouth Park and a charter member of the American Jockey Club, which operated Jerome Park. Mr. Withers had extensive Confederate interests and operated Brookdale Farm in New Jersey, where he dedicated himself to the breeding and racing of thoroughbreds, which carried his famous all-black silks. The Withers Stakes, which originated in 1874 and is presently run at Aqueduct Race Track, is named for him.

Mr. Bull always operated his own small stable, called the Saratoga Stable, with his partner John A. Morris, also an officer of the Saratoga Association, and raced in black and scarlet silks.

In the 1920s George Bull leased the Trim Cottage at One Fifth Avenue in Saratoga Springs. There he hosted endless social gatherings during the entire meet, where the party atmosphere placed rest on hold, until after the track season.

George Bull inhaled and breathed horse sport and traveled widely as a follower, leading the cheering and rooting section. He never missed a Kentucky Derby, journeyed to Tijuana for the Coffroth Handicap, and Liverpool, England for the Grand National. He frequently spent the frigid season with the hippic set at Aiken, and Miami.

Mr. Bull had a fine working relationship with track superintendent Thomas Clare, who along with his wife Ann, were transplanted by position to become year-around Saratogians. After Tom’s unfortunate demise in 1940, George Bull had the resolve to place Ann in the supervisory position, the first woman to do so and a posting she held until her retirement from NYRA in 1960. Ann Clare and George Bull fostered an esprit-de-corps on the track backside with weekly softball and boxing events featuring jockeys and stable hands.

In Mr. Bull’s time, the primary media outlet was newspaper dailies and trade papers. The turf writers appreciated the always accessible executive, and W.C. Vreeland of the Brooklyn Daily Eagle referred to him in print as “Genial George,” and John Kieran of the New York Times as the "Squire of Saratoga." Behind his back, all the   turf writers referred to George Bull as “Ferdinand,” as in the children’s book character, Ferdinand the friendly bull. Always humorously retold was when Eddie “World Telly” Galiani, perhaps a bit over-served at a turf writers gathering, called Mr. Bull “Ferdinand” to his face, which drew an explosive guffaw! 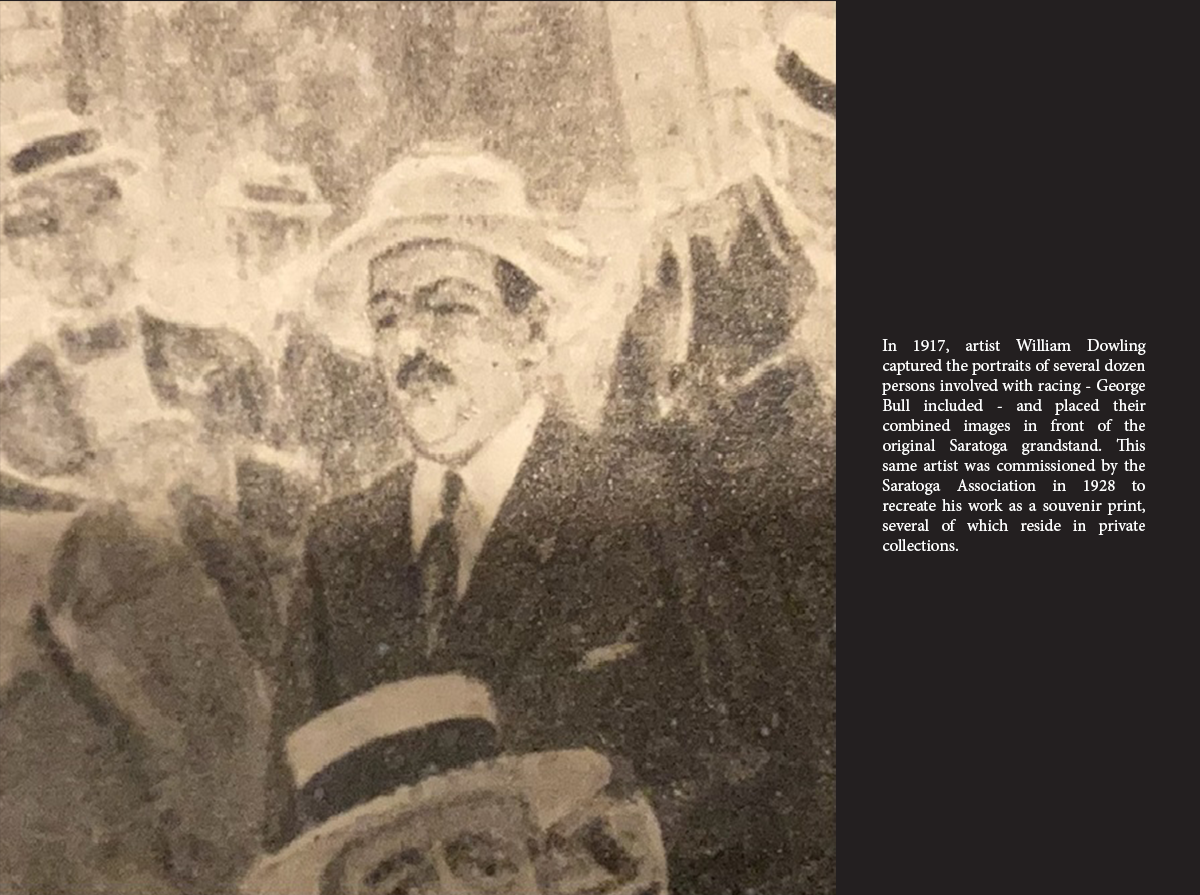 The Empire State has always had an upstate/downstate divide which George Bull seemed to easily bridge. He held an executive position at Empire City Race Track in Yonkers, and was a governor in the Turf and Field Club at Belmont Park. He loyally patronized Saratoga’s baths, mineral springs and restaurants; he acted as a steward at the New York State Fair racing events in Syracuse; and it was he who suggested the initial idea of bringing Thoroughbred racing into Western New York and was anxious to establish a race track in the Finger Lakes region. However, the Second World War interrupted his future plans.

Racing in Saratoga Springs was disrupted as well by the war, with the Spa’s race dates shifted to Belmont Park in an effort to save gasoline and precious commodities, such as rubber tires on the home-front. Mr. Bull and Mrs. Clare shifted their management responsibilities to the metropolitan track for the duration of the war. Alas, Mr. Bull passed away in the autumn of 1943, and did not witness racing’s return to his favorite strip.

Many years later, at the reopening of the rebuilt Aqueduct race track in Queens, where Mr. Bull staged legendary clambakes at his stable, he was memorialized in a caricature mural of New York racing immortals by Pierre Bellocq. PEB repeated this monumental work at Belmont Park, simply look for the buoyant corpulent chap, with a big cigar and radiant smile to identify George H. Bull, as the artist certainly captured his one-of-a-kind nature.Many years later Frank Sullivan, the sage of Saratoga, remembered his jovial elbow-bending friend and his exuberant gatherings. He wrote in the July 27, 1969 New York Times that, “George Bull was a stout, genial and gregarious man who was president of the Saratoga Racing Association in the pre-New York Racing Association era and who was never content unless he was giving a party…“

Mr. Bull certainly was a presence in the past, who helped define the Saratoga Springs we appreciate today.