PART ONE OF A TWO-PART SERIES

The following essay is the result of numerous discussions and debates among local historians but most of all between my business partner, Dave Patterson and myself. The exercise was designed to debate and arrive at a list of just ten people who were most pivotal in the development of this great city of Saratoga Springs. The debate had only one ground rule and that was that any person mentioned must have passed away. No living Saratogian could be considered for this list.  We wanted the nominated people to have a clear list of contributions and as you might think, the living would still be producing and therefore be harder to judge fairly.

So here it is. Due to article space this is my first five of the top ten list. Some may disagree, but it is my list and my attempt to define our history. This is part 1 of 2 articles.

I wanted to list the Putnams as a pair and not in the usual style of only mentioning Gideon. Close examination of Doanda’s life and contributions make her a great person for this list. The Putnams came to Saratoga Springs in 1789 rather poor and rented land to start businesses.  When the Putnams first arrived, they built a very productive sawmill on the outskirts of town. Gideon was very good at supplying early residents with lumber for all the construction needs to build a village. As I frequently say, Gideon and Doanda did not have to walk through a corn field in Iowa to understand the saying, “If you build it, they will come.” They immediately knew our mineral springs were a huge asset that needed to be supported and advertised. One of the best ways to ensure success was to provide a hotel that would afford visitors a comfortable stay while “taking the waters.” In 1802 the Putnams opened the first hotel in the village called Putnam’s Tavern and Boarding House. It stood on the northwest corner of Broadway and Congress Street. Area peoples laughed at the size of the structure that could house 70 people at a time. The Putnams proved their critics wrong and at the end of the first season they put an addition on the building to accommodate more guests. The Putnams advertised the mineral springs as a cure for many medical problems and the village grew as a health resort. They cleaned up the area around the Congress Spring and discovered the Columbia Spring at the same time. The accommodations provided by the Putnam family made a visit to Saratoga a delightful experience.

The Putnam’s hotel would grow and be such a huge success that they decided to expand by building a very large second hotel across Broadway from the Tavern and named it Congress Hall. The Congress Spring was so well known in the country that it was logical to name the new hotel Congress. Unfortunately, during construction, Gideon fell from the scaffolding and died months later from those injuries.

The Putnam’s Tavern and Boarding House would last well beyond the early death of Gideon in 1812 under the watchful eye of Doanda. She ran the business and raised the family of nine children to become future village leaders. The original Tavern and Boarding House would become Union Hall and then after the family sold it the name would change to Grand Union Hotel, once the largest hotel in the world. Many historians like to say that Gideon was the “Founding Father” of the village, I prefer to say Gideon and Doanda were the “Founding Family” of the village.

Mr. Clark was the first person to bottle the waters of Saratoga Springs. In June of 1811, Gideon posted a list of “rules” concerning the springs. Most were very common-sense based, but one was revolutionary for the village. The rule read, “The water at the springs would always be free” which made for a curious business model for the owners of the mineral springs. Since the water was free at the spring, the only options for revenue would be from the offering of mineral baths and the bottling of the waters for sale beyond the village.

John Clarke began to bottle the famous waters in 1823 with business partner Thomas Lynch. Clarke designed the first bottles and determined the quart and pint sizes for sale while opting for colored glass of browns and green. Interestingly enough, the colored glass was slightly less in cost than clear and provided for a higher profit margin and strengthened the belief that the medicinal properties of the water needed to be protected from degradation by sunlight. Clarke’s bottling would continue to grow until in 1880 the village was selling about 8 million bottles of our famed mineral water to most American cities and as far away as China. The raised letter glass bottles displayed the name of the spring as well as the location “Saratoga Springs N.Y.” These bottles become the calling cards for the city. They were sold everywhere and reminded people of our fame as the source for the desired waters. I might therefore consider him our first President of the Chamber of Commerce.

Clarke also paid for the first water tower in the city as well as starting a depository for donated furniture and household items to help residents suffering from house fires. Clarke also decided to lay out a Circular Street, that was very different in the country. At this time in history most cities were laid out with streets following a “grid” pattern. A curved or circular street was the first of its kind in the country. He began construction but was halted in the shape by land owners west of Broadway who refused to sell land to complete the development of that shape street.

Another major impact on the village was that Clarke proposed a 46-cent reduction in people’s highway tax for every tree they planted. This was quickly embraced by residents and the village developed a beautiful tree lined streetscape. John Clarke impacted so much in the early village he must have spot on this list.

John Morrissey helped to make Saratoga Springs a “fun” place for visitors. Morrissey came to the village in 1861 and opened a small gaming house on Woodlawn Avenue. It didn’t take long for him to realize that the wealthy visitors were not always here for their health. In August of 1863 he along with John Hunter, Leonard Jerome and William Travers would open the Saratoga Racetrack. The experiment was short lived that year but was a huge success. That success would have them buy acreage across the street from the original track and lay out the present-day Saratoga Race Course.

Morrissey would continue his hand with new ventures when he built and opened a premier gaming house that debuted as the Saratoga Clubhouse to be known today as the Canfield Casino in Congress Park.

Born in Providence Rhode Island in 1774 as Elizabeth Bowen, she was the daughter of a prostitute and a sailor. A hard and unstable early life lead her to move to New York City at age 18. Seeking stability and acceptance she began a relationship with a Captain Brown who made numerous trips to France. Since France was thought to be the epicenter of culture in the world at the time, she worked to learn many French phrases and know the ways of cultured people. When Captain Brown died accidently at sea, Eliza began to search for a husband of means. She eventually met and married Stephen Jumel, a wine merchant with holdings in France and the USA.

After her marriage, the Jumels sought social acceptance in NYC. After hosting a large party for the society of the city, she was still snubbed by them. Stephen died accidently in 1832 from a fall from a carriage and Ms. Jumel took control of the business and became very successful. She again searched for a husband that would provide stability and social elevation. She marries the former Vice-President Aaron Burr in 1835. Aaron Burr sought her money and Eliza sought his social status. The marriage didn’t last long as Burr spent her money and social connections were limited. She manages to divorce Burr on his death bed using a very talented lawyer who was a son of Alexander Hamilton. After Burr killed Hamilton in a duel, Hamilton’s son needed little motivation to win this case.

Madame Jumel was a tremendous business woman and was regularly at the center of social gatherings in the hotels of Saratoga. She fostered the daily ritual of carriage rides to Saratoga Lake and upon her death in 1865 she was the largest land-owning woman in the village. She served as a model for other woman and added tremendously to the society of the early village.

This is the first five members of my Top Ten People in Saratoga History. I hope you enjoyed it! 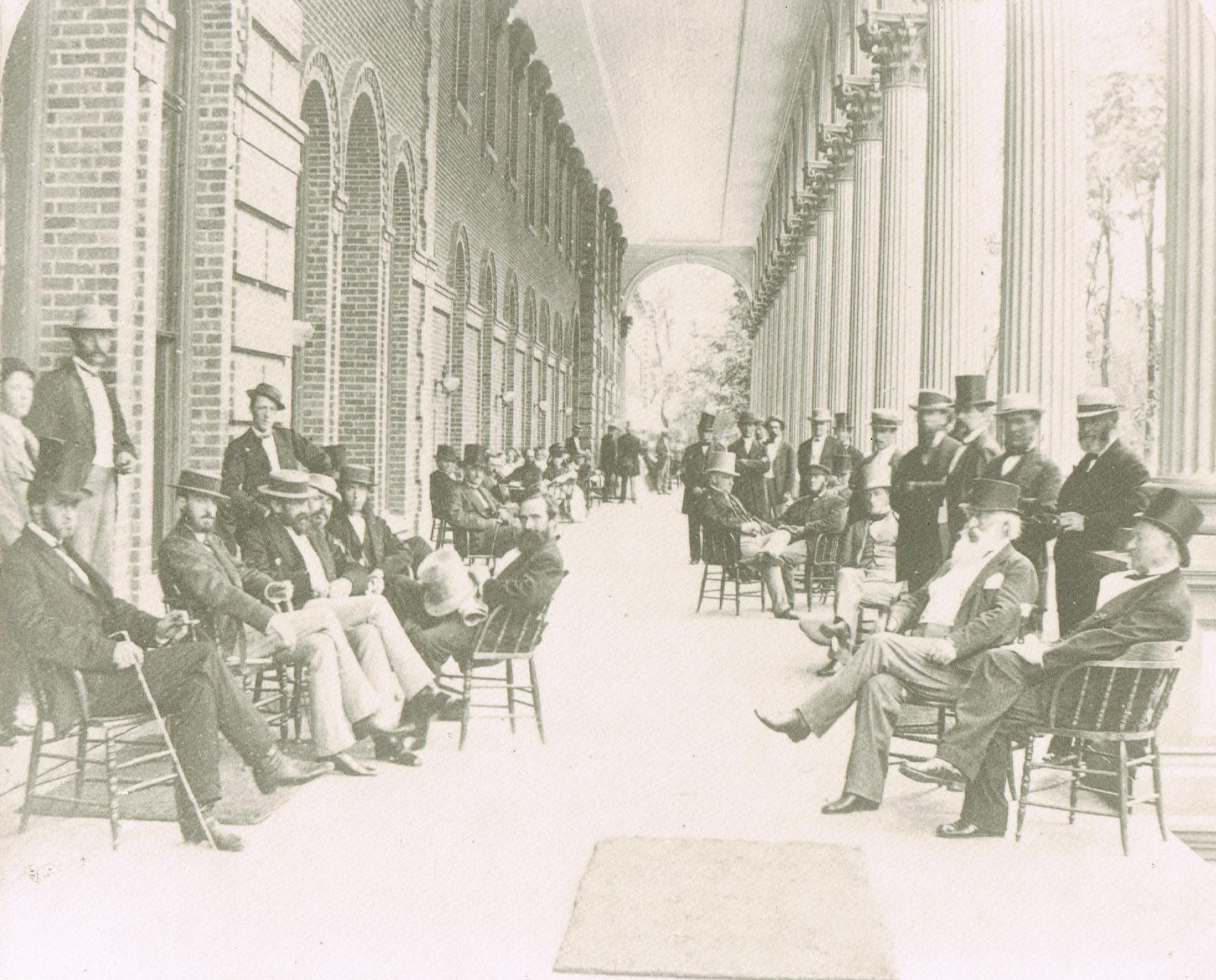 This is a marvelous image that reminds us of the number of summer visitors to Saratoga Springs in the 1800s. Congress Hall was one of the “Big Four” hotels in the city and was on the east side of Broadway stretching from Spring Street south to the entrance to Congress Park. 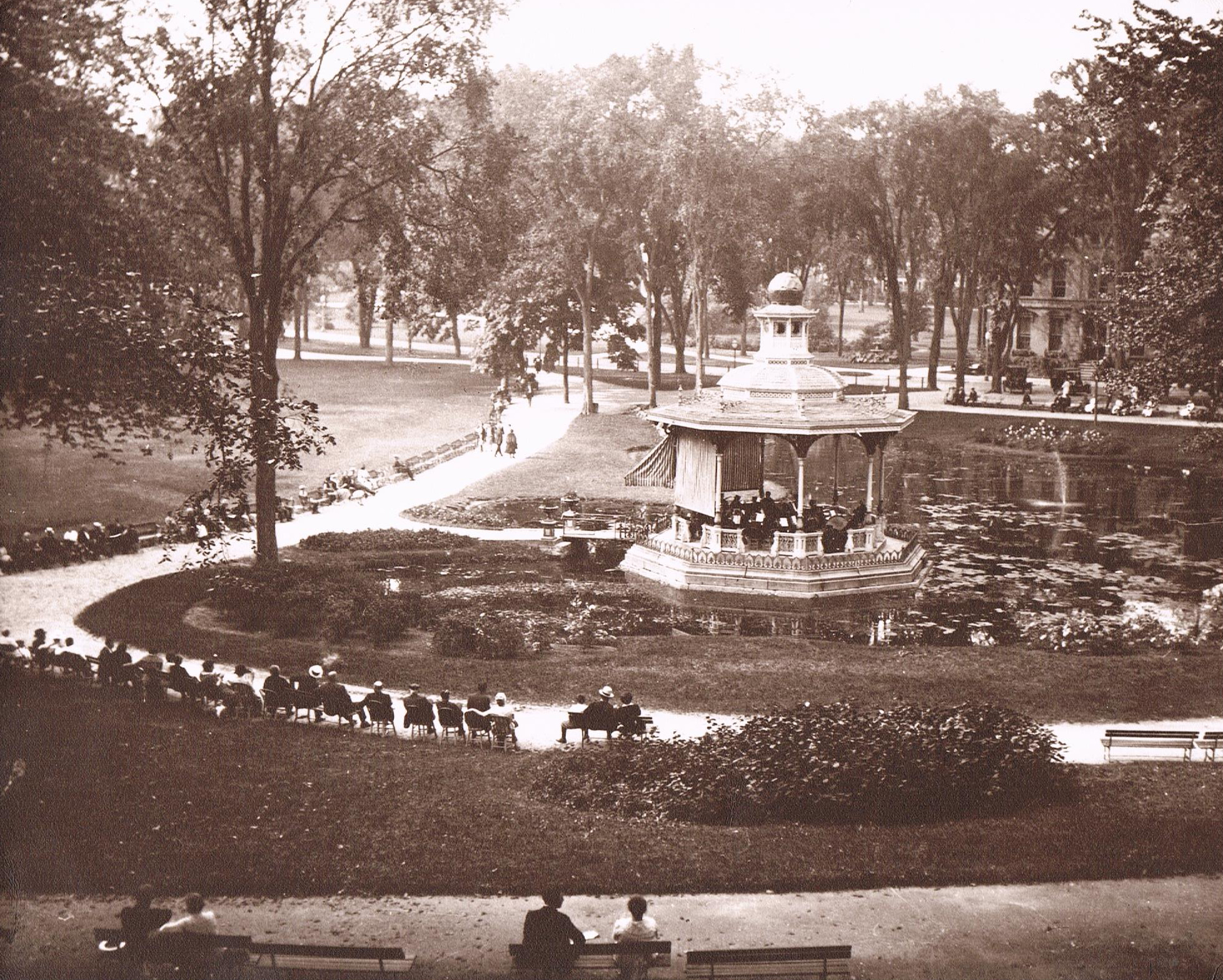 Congress Park was a magnet for summer visitors. Bands began playing at 7 a.m. in the bandstand to entertain visitors that were in the park to visit the famed Congress Spring every morning for their daily dose of mineral water. 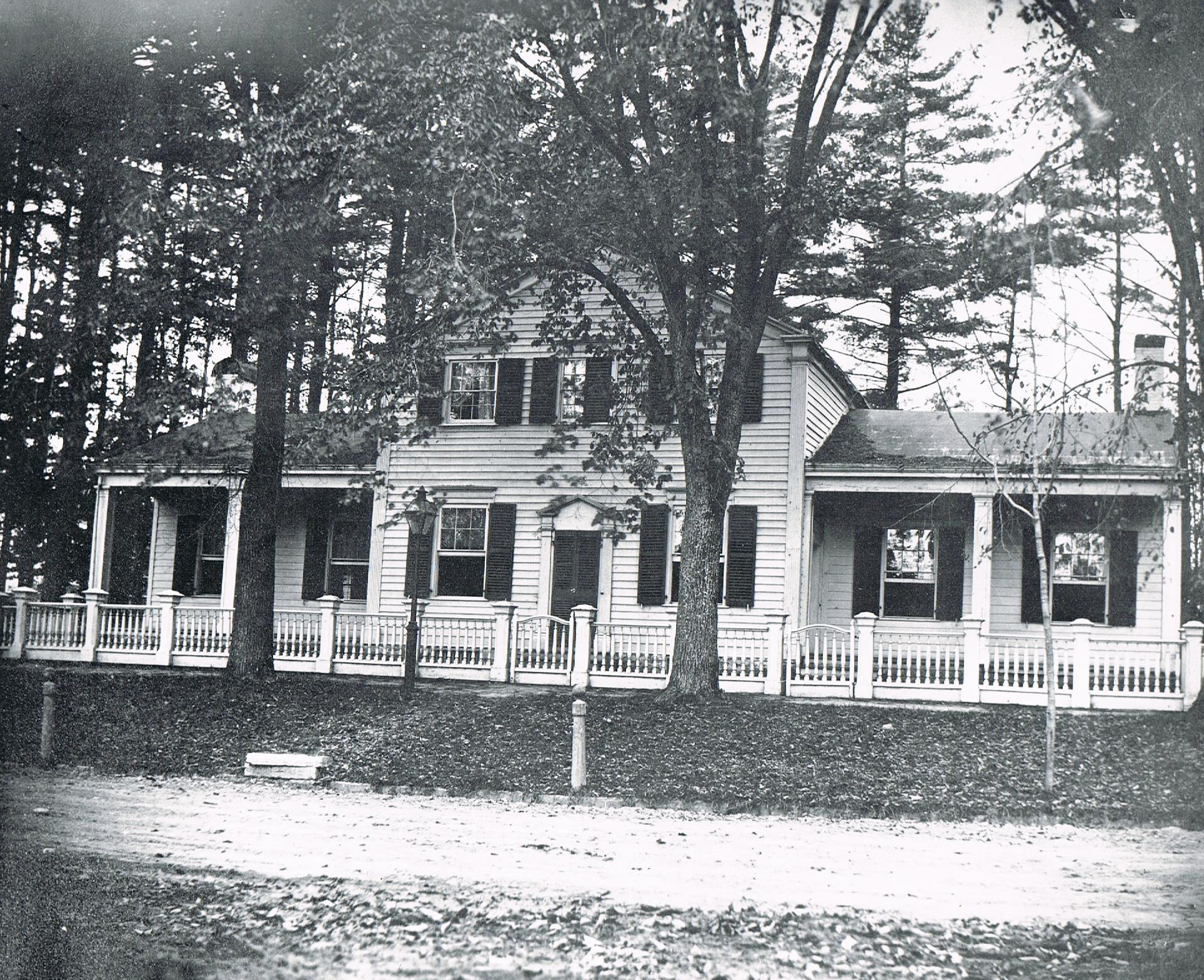 Pine Grove was the home for the famous Walworth family. Judge Reuben Hyde Walworth bought the building in the 1820s and the family lived there for generations until it was razed in the 1950s. This was the home of Ellen Hardin Walworth, one of the four founders of the Daughters of the American Revolution.