The shop that Russ works out of reflects his aesthetic. It is located on his property, outside of Northville and is well off the beaten path. His shop reflects his love of all things old. Russ gets a gleam in his eye when he talks about the shop.

Russ told me that shop was originally built in 1873. It was the original "Allen and Palmer Hardware and Tack" and was built by two civil war veterans named, appropriately enough, Allen and Palmer. The Hardware and Tack store originally stood in the town of Northville. Russ acquired the building in 2007, after it had been condemned. He disassembled it piece by piece and rebuilt it where in now stands. It took two years to close it in, but Russ told me that the shop is still a work in progress. When you are in the shop with Russ, you realize that the building is truly a labor of love.  The shop appears to have stood where it is now for its entire existence. Russ’s shop is filled with antique hand tools that Russ has collected over many years. The planes and other tools, although beautiful, are not for decoration. Russ uses them in his craft. When I mentioned to Russ how amazing I found what he had done with the shop, his response was to tell me that it wasn't that difficult. When you see the care and detail that went into the reconstruction of the building, it is hard to fathom.

We sat by Russ’ old Fisher Woodstove and talked about, his shop, his work and his love of history and particularly his love of all things wood, especially rustic Adirondack furniture.

Russ told me that he loves his work and feels fortunate to do what he loves in a place that he loves. When you look at pieces of Russ’s furniture, you can't help but notice the attention to detail in each piece. Everything is fitted perfectly. The joinery is meticulous. Russ told me that he uses an old technique, that was used by the early Adirondack Furniture builders. The technique is called cope and stick and takes time and patience to do correctly. He makes the fit so perfect that the pieces almost look like they grew together. I asked Russ how he developed the patience to do the work. He credited his parents and the way he grew up. Russ’ father was a luthier, and his mother did Mother of Pearl inlays on guitar necks. As a young boy, Russ worked with his dad, helping him build guitars. Russ told me that his dad, who is now 80, and still going strong, helped him acquire his woodworking skills. The family lived in an off-grid log cabin that his father built. Russ lived in the log cabin until he was 19. Russ told me that growing up living off-grid helped to teach him patience. The furniture that Russ builds certainly takes patience. A single piece often takes 6 months or more to build. Russ clearly has a love affair with wood, and it shows in his work. As he walked me through his shop, I could see him light up as he showed me pieces of bird’s eye maple, tiger maple and other examples of Adirondack sourced materials that he uses in his work. Much of the material that Russ uses in his work is sourced from local loggers. Many local loggers know Russ and when they see a unique log or burl, they will often bring it to Russ’ shop. Russ told me that it is not uncommon for him to find wood burls and logs waiting for him when he gets home from an errand. He also acquires much of his materials by spending many hours in the Adirondack Forest searching for the perfect pieces of wood to use in his projects. He told me that he enjoys spending time alone in the woods searching for his materials and will often search for hours to find one or two pieces that he thinks he can use. He told me that when he finds a particular piece, he can visualize exactly where it will end up or how it will be used as soon as he picks it up. Russ believes that a piece of Adirondack furniture should tell you the story of the person that built it. Russ is known for his twig work, hand planed surfaces, attention to detail and especially his burl veneers that he often uses on the front of cabinets that he builds. 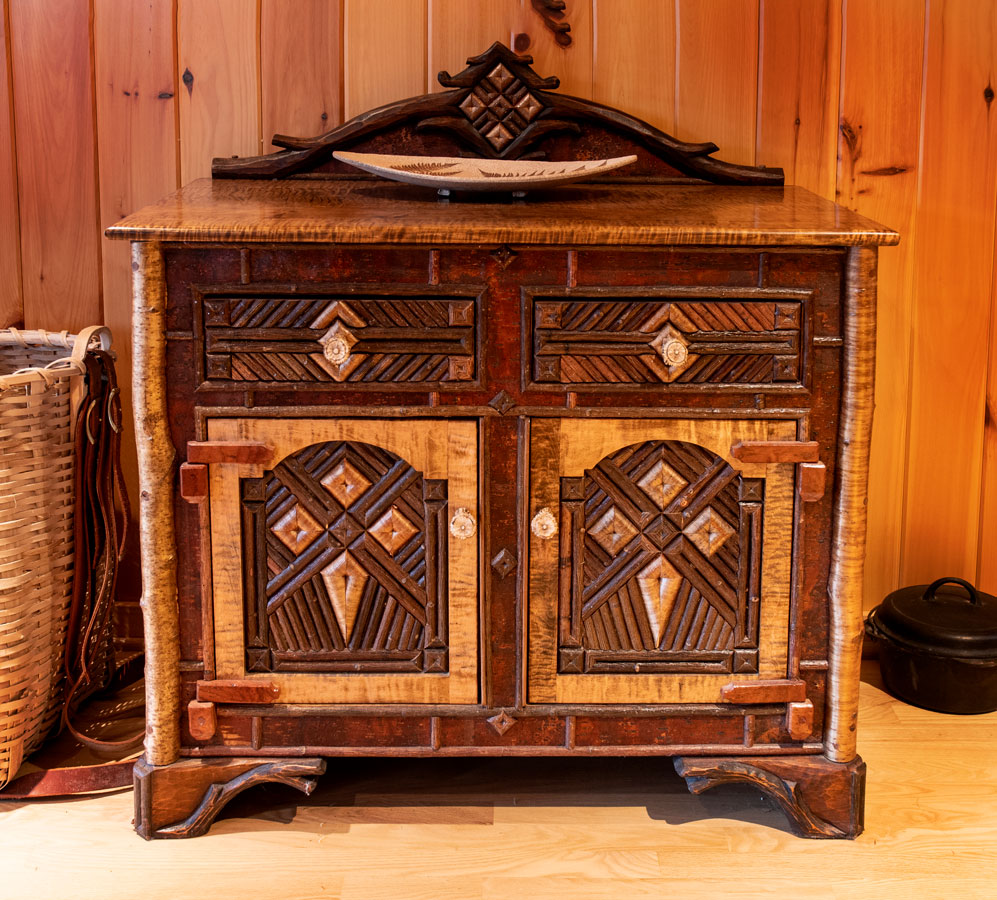 Much of Russ’ work is commissioned by collectors of Adirondack furniture. Many of them find him at The Blue Mountain Lake Rustic Furniture Show where he sets up each year to show his work. Some of his work is also on display at “L. Post Rustics Artisan Furniture & Fine Art Gallery in Lake Placid,” where you can see many of his pieces.

When talking to Russ it was obvious to me that he is a unique person with a unique skill. To me, he is what the Adirondacks are all about. The cliché about someone being born in the wrong generation is not a cliché when it comes to Russ Gleaves.  Russ would have been perfectly comfortable living in the Adirondacks in the 1890s doing exactly what he is doing now. I feel very fortunate to have been able to spend some time with him and see his amazing work. It was almost like stepping back in time.