This year marks the 45th anniversary of the Saratoga Springs Preservation Foundation preserving and enhancing the architectural, cultural, and landscaped heritage of Saratoga Springs.  Our vibrant, beautiful city is far different from the one 45 years ago.

Between the 1950s and 1970s, Saratoga Springs was a historic resort community in decline.  Important local landmarks had been lost to a struggling economy, urban renewal, and devastating fires.  Those losses combined with the prospects of a hotel being built in historic Congress Park; a highway going through Franklin Square, our oldest residential neighborhood; and the construction of a mall, sparked members of the community to create the “Plan for Action,” to revitalize downtown.

Critical to the plan’s success was the preservation of downtown’s historic buildings.  In 1977, the Saratoga Springs Preservation Foundation was established to oversee a grant program that provided $450,000 in funding to restore historic exteriors of 26 buildings and make them code compliant.

The 1871 Ainsworth Building in 1975 prior to receiving
a rehabilitation grant from the Foundation and after.

Immediately after the Foundation was established, it was faced with advocating for the preservation of an endangered 1871 Methodist church at 25 Washington Street.  In 1976, the building was condemned by the City of Saratoga Springs due to the condition of the east tower.  The Foundation received a $100 grant to complete a structural report, indicating that the building did not need to be demolished.  The Foundation secured an agreement for the Universal Baptist Church to reimburse the City of Saratoga Springs for the necessary repairs if the church signed three buildings over as collateral to the City. Unfortunately, the Foundation had to intervene again in 1998, when the dwindling congregation was faced with their building being again condemned due to a potential roof collapse. The Foundation again secured funding to stabilize the building. However, a more permanent solution was needed - a new non-profit, Universal Preservation Hall, was formed to adapt the landmark building into a community performing arts/events space.

Since its inception, the Foundation has played a critical role in protecting not only our historic downtown, but also our charming neighborhoods.  Following on the early efforts of Beatrice Sweeney, City Historian, who listed Franklin Square and Congress Park on the National Register of Historic Places, the Foundation sought National Register of Historic Places designation for Broadway, which includes downtown and the magnificent mansions on North Broadway; the East Side neighborhood; Union Avenue, including the Saratoga Race Course; and the West Side neighborhood.  The Foundation also advocated for local ordinances to ensure their preservation and to prevent demolition, insensitive alterations, and inappropriate new construction.  Today, it regularly advocates for best preservation practices before the land use boards of the City of Saratoga Springs. 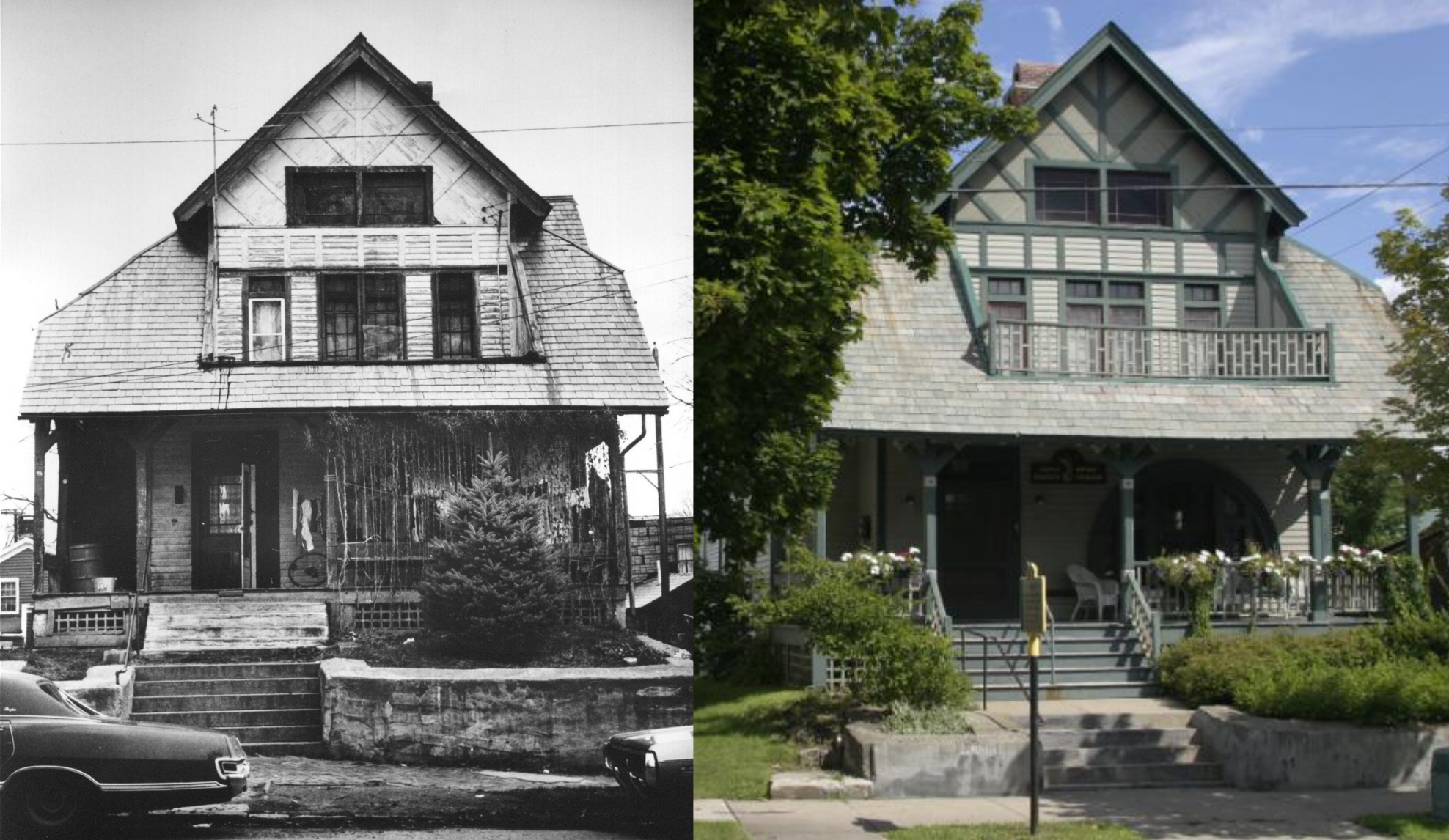 The derelict former Adirondack Railroad Company depot prior to the Foundation
undertaking a rehabilitation of the building and after.

By providing technical assistance, the Foundation was able to help preserve the historic buildings along Union Avenue and surrounding streets that formed the original campus of Skidmore College following the college relocating to their new campus on North Broadway in 1966.  Skidmore College sold the more than 80 buildings to Verrazzano College in 1972.  In the fall of 1974, Verrazzano College opened and by June of the following year the bank foreclosed on the mortgage.  Saratoga Springs was faced with many buildings, including some of its grandest historic residences on Union Avenue, being left vacant and deteriorating. With the leadership of local realtor John T. Roohan, the buildings were sold. The Foundation provided the new owners with technical assistance to secure federal tax credits that were critical in offsetting the significant expense of rehabilitation, allowing many of the buildings to return to single-family residences. Today, the Foundation continues to provide technical assistance to people seeking rehabilitation tax credits and undertaking rehabilitation projects.

The Foundation also helped to revitalize the West Side of Saratoga Springs.  An early project it undertook was saving 5 Clinton Street, an 1872 row house that had fallen into significant disrepair and was threatened with demolition.  The City of Saratoga Springs deeded the property to the Foundation. The building was rehabilitated and the proceeds from the sale were invested in other preservation projects.  This project served as a catalyst for others to invest in the row houses. 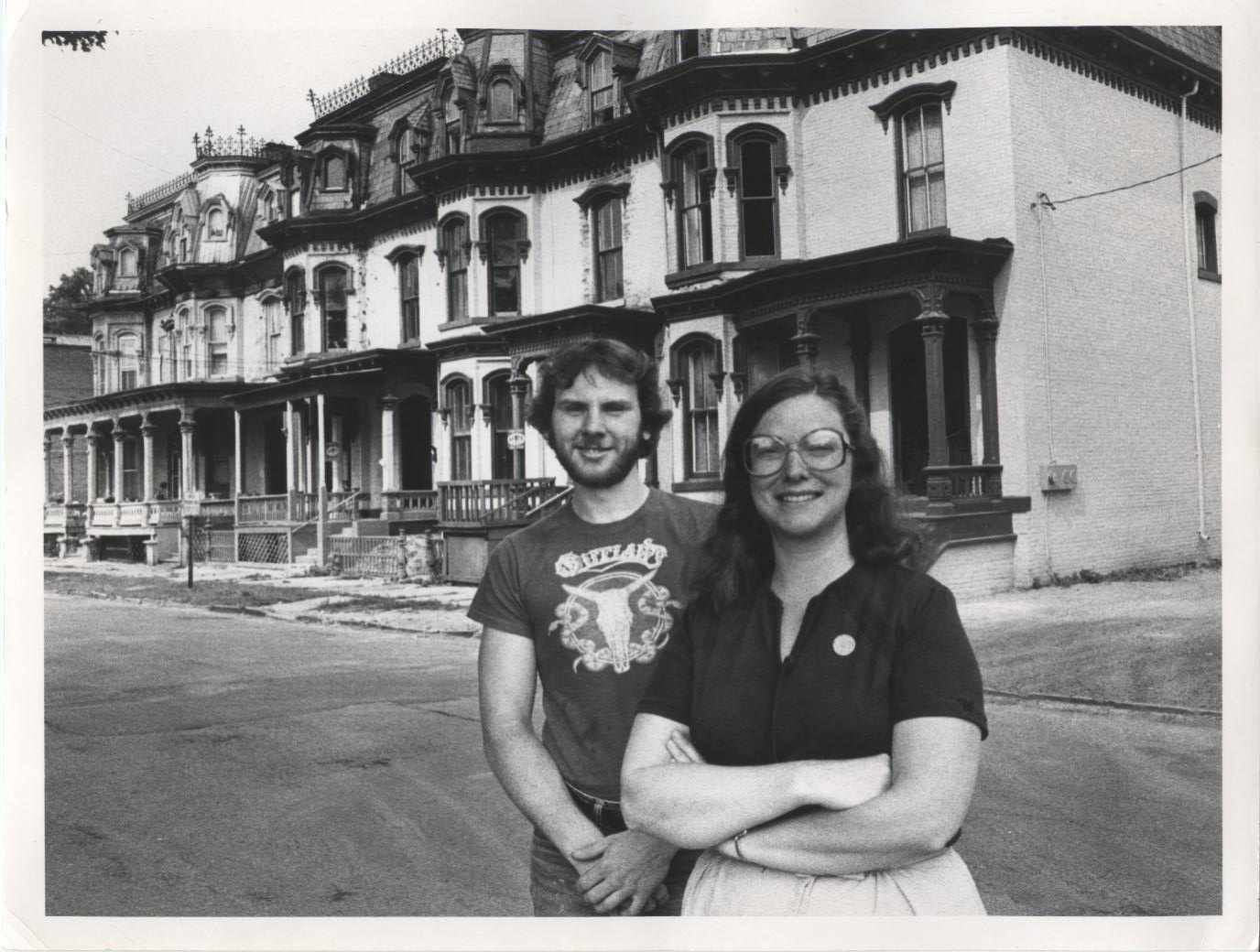 Julia Stokes, founding executive director of the Foundation, in front of the Clinton Street row houses. 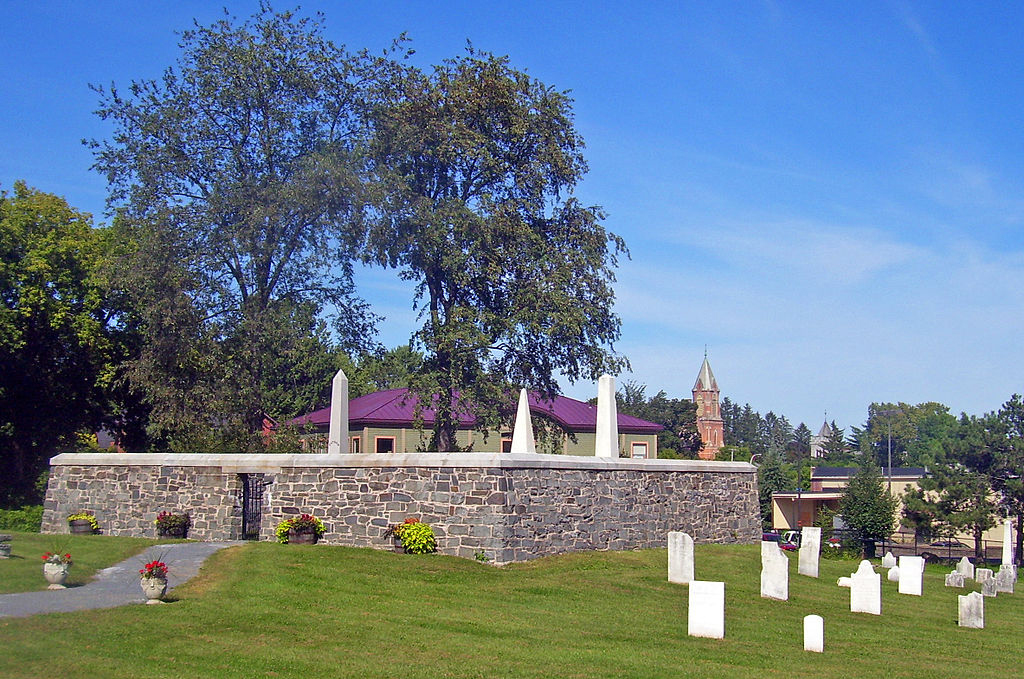 In 1988, the Foundation undertook the rehabilitation of the derelict former 1884 Adirondack Railroad Company depot at 117 Grand Avenue.  Upon its completion, the building served for a period of time as its office with low-income apartments above.

The Foundation also secured a $190,000 New York State Main Street grant for Beekman Street in 2005 to provide funding for façade improvements and building rehabilitations. In total seven buildings benefitted from the grant program and stimulated an additional $750,000 in investment, helping to revitalize this small commercial street. 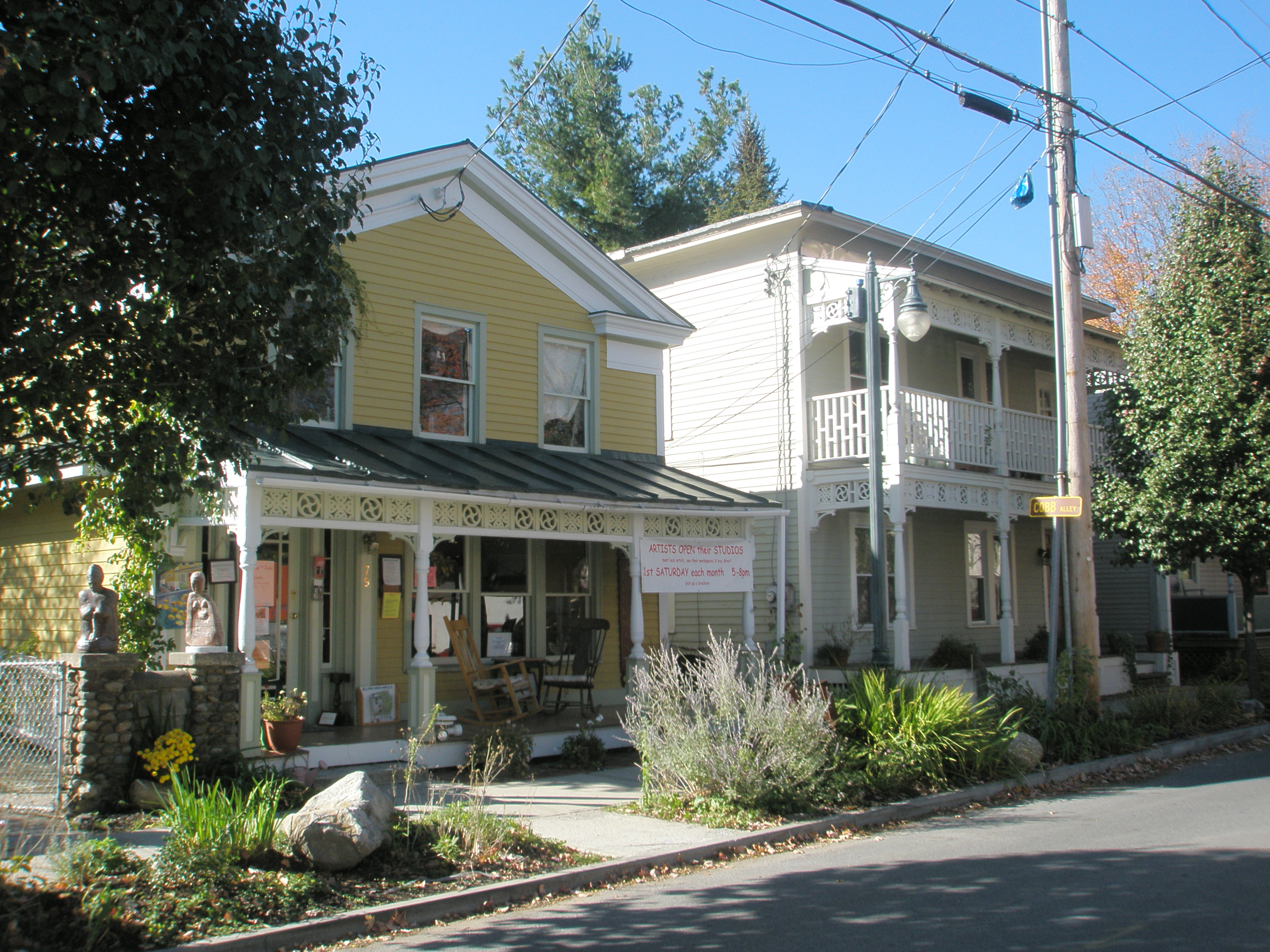 The Foundation has a unique role in preserving the Saratoga Race Course, the oldest sports venue in the country.  It researched and documented nearly all the 200 structures and landscape features of the 350-acre site.  The Foundation regularly offers tours to share the resulting rich history about the development of the track.  In addition, the Foundation has the important role of being the only required local advisory opinion for all capital improvements at the track, providing guidance on rehabilitation and new construction projects. 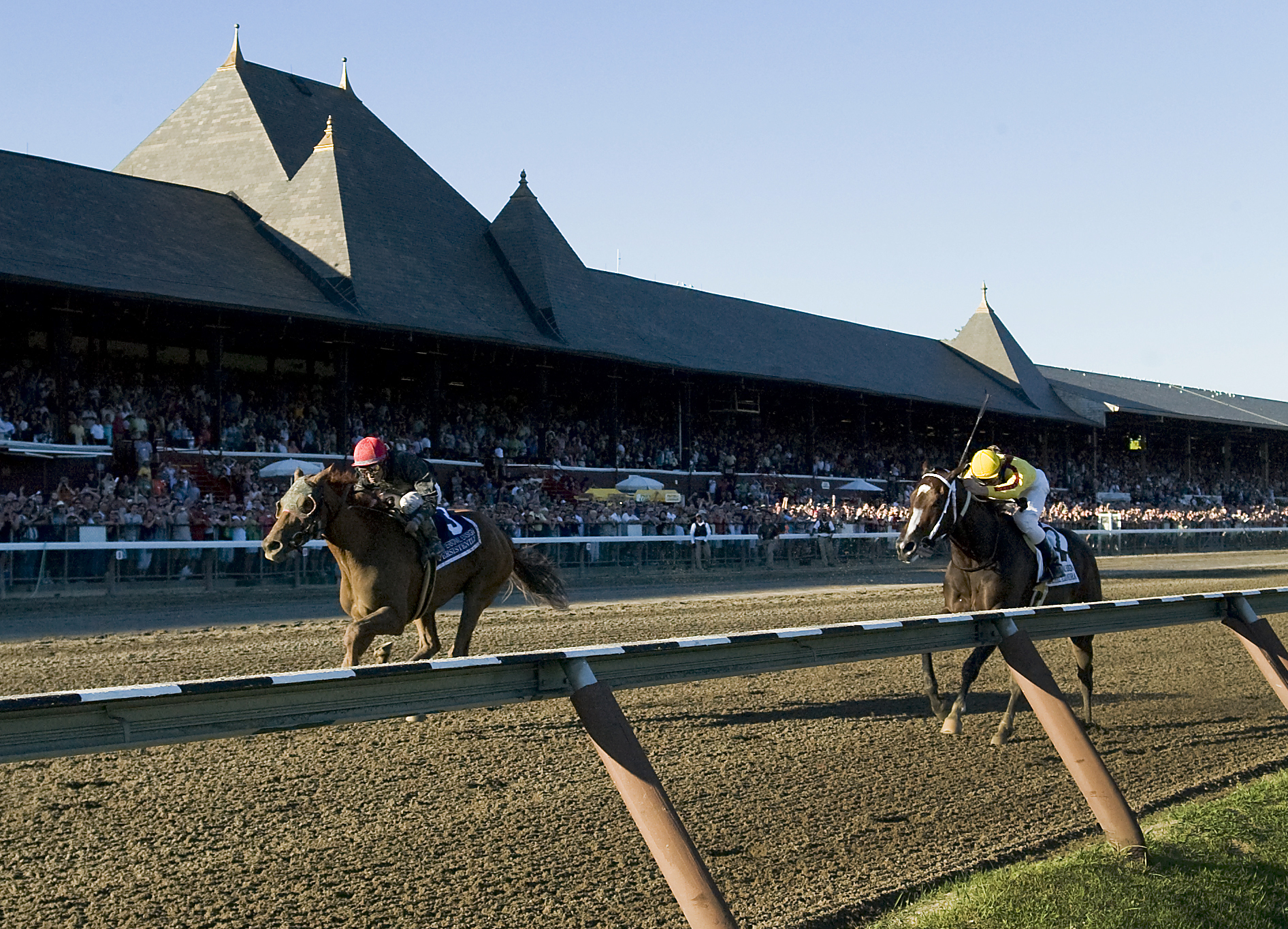 In 1998, the Foundation established its Ten to Save list to raise awareness for endangered buildings, which is periodically reviewed and updated.  The 1851 Alexander A. Patterson residence, located at 65 Phila Street, had been on the list since its inception.  In 2021, the Foundation successfully opposed the proposed demolition of the long-neglected property and purchased it. The Foundation will undertake environmental abatement, structural stabilization, and an exterior restoration.  The goal is to remove the challenges associated with this property, remove blight from the neighborhood, and sell it to someone who will complete the interior and be a good steward for years to come. Funds from the sale will be reinvested into the community with another restoration project.

Most recently, the Foundation successfully advocated for 166 Excelsior Avenue, the Smiley-Brackett Cottage, to be designated a Local Landmark. The Gothic Revival cottage was built in 1871 by Sarah F. Smiley, an author and one of the first women ever to speak in front of a mixed congregation of men and women.  Between 1919 and 1969, it was also the home of Charles Brackett, an Oscar award-winning screen-writer.  The long vacant, neglected property that is eligible for individual listing on the National Register of Historic Places also was on the Foundation’s endangered list since its inception.  Over the years, the Foundation attempted to assist the owner, but he declined all offers.  In an effort to provide a measure of protection, the Foundation recently sought Local Landmark designation, which now requires that any proposed exterior changes, new construction, or demolition be reviewed by the Design Review Commission.

In addition, to advocacy, technical assistance, and restoration projects, the Foundation fulfills its mission through education.  It hosts tours and presentations on a variety of different topics throughout the year, in-person and virtually.  Most popular are the Sunday Strolls, 90-minute walking tours of different neighborhoods. The annual Historic Homes Tour offers the rare opportunity to see the interiors of private historic homes throughout Saratoga Springs.  The event held in May is the Foundation’s largest fundraiser.

The Saratoga Springs Preservation Foundation is honored to have played a significant role in preserving our past to protect our future. To learn more about the Foundation’s advocacy efforts, educational programs, restoration projects and special events, please visit saratogapreservation.org or call 518-587-5030.